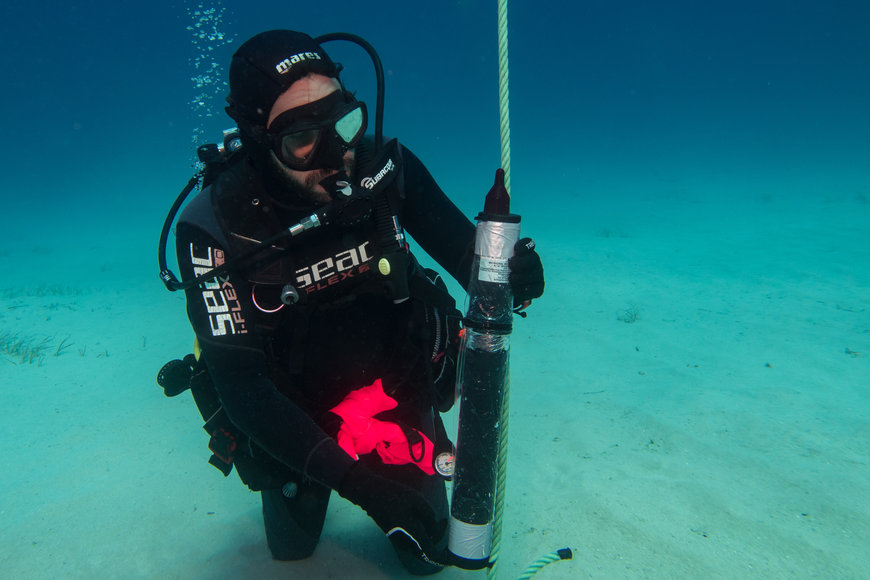 The lives of fish are mysterious. That's because until recently it was technically impossible to observe them in aquatic habitats over a long-term. In the journal Science, behavioural ecologists with the participation of researchers from the Leibniz Institute of Freshwater Ecology and Inland Fisheries (IGB) and Humboldt-Universität zu Berlin (HU Berlin) now present methods that combine high-resolution tracking technologies with Big Data analyses to investigate the movements of fish and other animals. A team led by Professor Robert Arlinghaus has equipped an entire lake in Brandenburg with a modern tracking system that provides 24/7 insights into the world of fish. Here you can find the publication.

Robert Arlinghaus, Professor of Integrative Fisheries Management at Humboldt-Universität zu Berlin (HU) and the Leibniz Institute of Freshwater Ecology and Inland Fisheries (IGB), investigates fish behaviour to improve the management and protection of fish populations. In a research lake in Brandenburg, his team has set up the only fish tracking system in Germany that can measure the positions of all tagged fish to within a few metres every few seconds. Depending on the transmitter type and battery weight, numerous fish species can be tracked over several years at the same time. The research lake becomes an aquarium.

"Studies under natural conditions in lakes and rivers are important, but rare. Most behavioural research is based on laboratory studies or relatively rough records of the animals' positions in the wild. But what exactly fish do all day, how and with whom they interact, how different individuals respond to threats and new situations, is completely unknown for most natural ecosystems and species.  In fact, we understand the behaviour of lions, chimpanzees and elephants far better than that of the native fish in the pond on our doorstep," explains Robert Arlinghaus.

The fisheries ecologist contributed the findings from the Brandenburg research lake as co-author to a Science review study in which an international team of behavioural ecologists and statisticians has summarised the current state of knowledge on high-resolution tracking of wild animals. The authors speak of a veritable revolution in the study of animal movements.

GPS fails under water and costs too much energy

After all, analysing fish movements in the water is not easy. "While GPS technology has significantly advanced the analysis of the terrestrial wildlife, GPS tracking fails below the water surface. Moreover, GPS is heavy on energy and either allows only tracks at coarse resolution or for very short time, and most GPS transmitters would also be too heavy for most of the fish we want to study. Acoustic telemetry with underwater hydrophones was our solution," explains Prof. Dr. Thomas Klefoth from Hochschule Bremen, who was involved in the development and installation of the whole-lake tracking system for fish as a doctoral student in Robert Arlinghaus' team and also contributed to the study as a co-author.

Acoustic telemetry, in which a transmitter in the fish emits sound waves, was paired with a network of underwater receiving stations. But for many years, this technology produced only very coarse signals at widely scattered receiving stations. "We increased the number of receivers in the water and calculated the positions of the fish from the minimal time differences when the sound waves arrived at the receiving stations. Because the acoustic transmitters, unlike GPS technology, are very energy-efficient, it was possible to locate individual animals over several years and several times a minute with extremely high accuracy. And because the transmitters are now very small, this even works with fish that are as small as 10 centimetres," added Robert Arlinghaus, initiator of the project at IGB. However, the installation and maintenance of such a system, especially when being replicated across several lakes, is very complex and expensive, which is why there are currently only a handful of these whole-lake projects worldwide.

The new technology allows completely new insights into fish behaviour under water. An analysis of the behaviour of a carp population showed that the fish like to swim around in groups and, especially in the summer, form social networks in which individual animals go in search of food with very specific conspecifics, similar to a loose friendship. In winter, these stable relationships disband. To the surprise of the researchers, the carp then swam around in larger shoals in the cold water.  Until now, it had been assumed that carp, as warm-water fish, hibernate in the cold months in the deepest part of the lakes.  By contrast no such bonds were found in the rather isolated pike. No wonder - cannibalism is widespread among pike.

Animals with personalities: Shyness or fearlessness is already evident in young fish

The existence of consistent individual differences in behaviour – also known as personalities – was clearly demonstrated in many different fish species the research team tracked in freshwater and coastal sites. Robert Arlinghaus' team combined the behavioural data with data on nutrition and reproduction. This showed that perch, which are faster growing when young, also show different foraging and spawning behaviour as adult fish, and that behavioural traits, growth, life history and diet are closely coupled.

In addition to basic research, the findings are relevant for nature conservation and fisheries management. "We were able to determine that the most active pike are selectively captured by anglers. This results in a selective pressure towards shy fish. With knowledge about the movement hotspots of the fish, the tracking facilitates better planning for management measures, such as optimizing the dimension of protected areas or length-based harvest limits," explained Dr Christopher Monk, postdoctoral researcher at the Institute of Marine Sciences in Norway and former PhD student in Robert Arlinghaus' research group.

Another recent study by Christopher Monk and colleagues showed that pike from foreign lakes released into anexperimental lake adapted poorly and reproduced less than resident fish. And newly introduced wels catfish showed a difference in behaviour compared to resident fish that was evident months after release. The common method of stocking fish, which was replicated in the experiment, may sometimes not bring the desired success and may even weaken the fish populations.

Many fish come into contact with a fishing hook in the course of their lives for example, when they are caught as small, young fish and then put back into the water. And the animals learn from their experiences to avoid fishing hooks in the future. Carp learn particularly quickly - a phenomenon the research group calls "timidity syndrome". Fishing experiments in the research lake proved the decline in catchability of carp, although the fish continued to feed in the immediate vicinity of the fish hooks. Accompanying camera recordings showed: the carp learned to distinguish between baits with and without hooks and simply spat out the baited hooks.

Revolution in the ecology of movement

According to the team of authors, high-resolution tracking techniques will revolutionarize movement ecology of animals, as new detailed experiments in nature are now possible, providing a more realistic picture of the animal’s lives and responses. International networks such as the European Tracking Network or the Lake Telemetry Network facilitate cooperation and data integration across different laboratories. Thereby limitations such as the mostly regional coverage with high resolution tracking devices can be partly compensated. Through high resolution tracking the effects of environmental and climate changes on wildlife can be better understood, and nature and wildlife conservation be advanced on this basis.

A 25 ha lake in northern Brandenburg, Germany has been equipped with a high resolution acoustic telemetry system, using reverse-GPS technology. The system enables the long-term, around-the-clock tracking of individual fish movement at an unprecedented level of detail. The positions from four freshwater fish species, common carp (Cyprinus carpio), European catfish (Silurus glanis), Eurasian perch (Perca fluviatilis) and tench (Tinca tinca) were tracked simultaneously in three dimensions logging positions every 5 to 35 seconds for several years. A snapshot of their movement from a bird's eye view is shown from October 2015, where each circle represents an individual fish, and movement trails represent the previous 10 minutes of individual movement. The separation of fish species to avoid competition with each other can be seen. For example, the European catfish (a large predator) is night-active, while the perch (a smaller predator) uses the daylight to hunt and rests at night. Environmental data collected by a weather station located at the lake is also shown.

Our research activities are focused on developing robust foundations for the sustainable management of wild fish stocks in the context of angling in inland waters. We take an inter- and transdisciplinary research approach to analysing angling as a coupled social-ecological system. We build bridges between fisheries ecology, fish behavioural ecology, fisheries evolution and applied social sciences. In addition to fish population dynamics, we also focus on the attitudes and behaviour of anglers and decision-makers in associations and authorities. Our practice-oriented research is based on theoretically motivated analytical frameworks and uses both empirical and modelling approaches. We cooperate with a wide range of universities and research groups at home and abroad. Our practice partners include angling clubs, associations and official administrative practice as well as the Food and Agriculture Organization of the United Nations.

Picture: Receiving stations under water detect the fish movements. The picture is from a research cooperation with the IMEDA Institute in Mallorca (© Josep Alós).