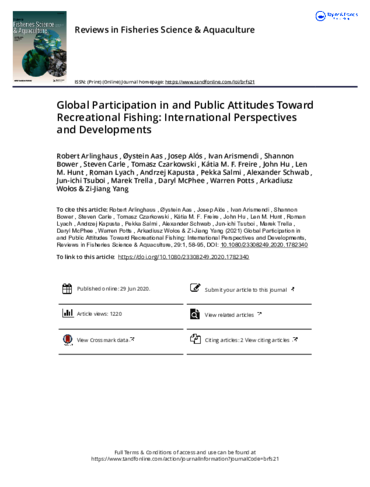 The literature on global trends in recreational fishing, the determinants of participation in recreational fishing, and the social embedding of recreational fishing in the public eye are reviewed across the world. Data support a conceptual life-cycle model of fisheries according to which interest in recreational fishing rises rapidly with economic development before leveling off and eventually declining. Participation in recreational angling across the globe varies substantially and is directly related to societal-level developments affecting resources, time, and socialization into fishing. Moreover, culture and the way that fish are historically situated within society appears to affect interest in fishing and the public perception of certain fishing practices. Across the more developed western countries, a sustained shift in public values from anthropocentric to more biocentric viewpoints is documented. This shift puts traditional fisheries management that manages ecosystems for optimal fishing experiences under increasing scrutiny and elevates biodiversity conservation toward a key goal of contemporary fisheries management in many countries. However, while a pro fish welfare discourse can be traced to almost all developed countries covered in this review, this does not mean the recreational activity is threatened or welfare-oriented regulations are widely implemented, with a few exceptions in selected countries. Public surveys conducted in mainly developed countries around the world instead reveal that people generally view recreational fisheries as an acceptable pastime. Major structural changes are occurring in many societies related to immigration, increasing ethnic and cultural diversity of populations, and social value change. Yet, little is known how these changes might affect recreational fishing participation and behavior, and the view of the general public toward fishing in the future. Panel research designs that repeatedly survey the public, and recreational fishers, will be needed to track value and participation changes over time, but such designs are rarely implemented in most countries that were reviewed in this work. Data gaps are particularly strong for Africa and large parts of Central and South America as well as Russia and Asia.