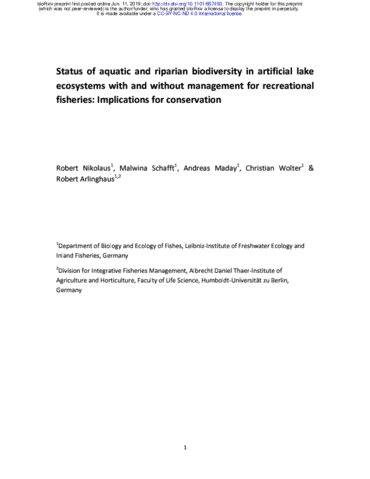 1. There is consensus that humanity is facing a biodiversity crisis, with freshwater-associated biodiversity being in particularly dire state. Novel ecosystems created through human use of littoral resources, such as gravel pit lakes, can provide substitute habitats for conservation of freshwater biodiversity. However, many of these lakes are managed for recreational fisheries and may exhibit generally high recreational use intensity, which may negatively impact aquatic biodiversity.

3. The average species richness and conservation value of all taxa examined was similar among both lake types, with the exception of amphibians whose conservation value was found to be larger in unmanaged lakes. With the exception of submerged macrophytes – a taxon found to be particularly species rich and extensively developed in managed lakes - no faunal breaks in any of the taxa were revealed when examining the pooled species inventory of managed and unmanaged lakes.

4. Variation in species richness and conservation value among lakes was strongly driven by available vegetated and woody habitat, lake morphology and location in the landscape, and not by the presence of recreational fishers or general recreational use intensity. Collectively, there were limited evidence found that anglers and recreational fisheries management constitute a relevant stressor to aquatic and riparian biodiversity in gravel pits of the study region.