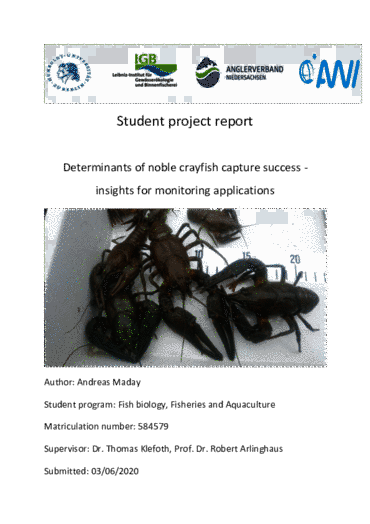 Native noble crayfish (Astacus astacus) populations in Europe are declining mainly based on the crayfish plague (Aphanomyces astaci). Stocking and establishment of uninfected populations within isolated waterbodies like gravel pit lakes constitutes one of the promising strategies to conserve this highly endangered species. Such management actions require adequate monitoring to detect crayfish populations and to validate stocking success which is commonly done using baited traps. Type of bait and positioning of traps within a water body may significantly influence monitoring outcomes. Littoral structures, substrate density, depth and temperature are known to influence capture success of American crayfish. However, less research has been done on European species. Within three artificial gravel pit lakes in northern Germany where noble crayfish have been stocked in the past, we repeatedly investigated trapping success of different bait types (pellet, salmon meat, and no bait) and their influence on detection rates. Further, microhabitat specific data were collected for each trap and analysed for their impact on catch rates using generalized mixed models. All models best predicting crayfish detection included bait type, temperature, depth, lake ID, and the consecutive fishing day where capture success increased with traps using salmon as bait at warmer waters in shallow areas during the second of three consecutive fishing days. The surrounding microhabitat, soil hardness and trap success of neighboring traps were of less importance for prediction of capture success. Former stocking was successful in two of three pit lakes with a low but self-reproducing population density (total CPUE < 0.2) in one lake and a high population density (total CPUE > 1) in the second lake. The third lake was free of crayfish although intense stocking occurred in the past. Suitability of all three waterbodies was evaluated using a suitability index and did not differ considerably between the lakes apart from predator abundancies. My findings show that salmon meat is a superior bait and that temperature / depth selection positively impacts noble crayfish detection in artificial waterbodies and should be considered when establishing species monitoring plans.