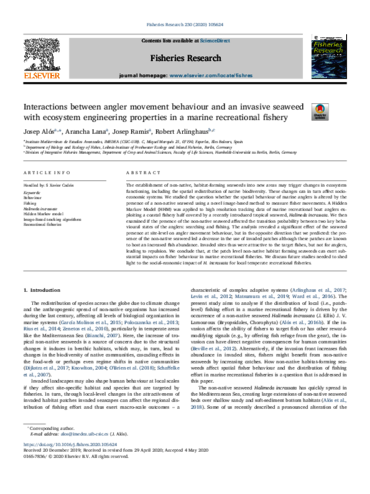 The establishment of non-native, habitat-forming seaweeds into new areas may trigger changes in ecosystem functioning, including the spatial redistribution of native biodiversity. These changes can in turn affect socioeconomic systems. We studied the question whether the spatial behaviour of marine anglers is altered by the presence of a non-native seaweed using a novel image-based method to measure fisher movements. A Hidden Markov Model (HHM) was applied to high resolution tracking data of marine recreational boat anglers exploiting a coastal fishery half covered by a recently introduced tropical seaweed, Halimeda incrassata. We then examined if the presence of the non-native seaweed affected the transition probability between two key behavioural states of the anglers: searching and fishing. The analysis revealed a significant effect of the seaweed presence at site-level on angler movement behaviour, but in the opposite direction that we predicted: the presence of the non-native seaweed led a decrease in the use of invaded patches although these patches are known to host an increased fish abundance. Invaded sites thus were attractive to the target fishes, but not for anglers, leading to repulsion. We conclude that, at the patch level non-native habitat forming seaweeds can exert substantial impacts on fisher behaviour in marine recreational fisheries. We discuss future studies needed to shed light to the social-economic impact of H. incrassata for local temperate recreational fisheries.