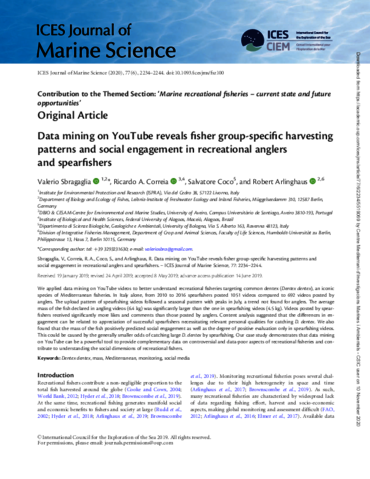 We applied data mining on YouTube videos to better understand recreational fisheries targeting common dentex (Dentex dentex), an iconic species of Mediterranean fisheries. In Italy alone, from 2010 to 2016 spearfishers posted 1051 videos compared to 692 videos posted by anglers. The upload pattern of spearfishing videos followed a seasonal pattern with peaks in July, a trend not found for anglers. The average mass of the fish declared in angling videos (6.4 kg) was significantly larger than the one in spearfishing videos (4.5 kg). Videos posted by spearfishers received significantly more likes and comments than those posted by anglers. Content analysis suggested that the differences in engagement can be related to appreciation of successful spearfishers necessitating relevant personal qualities for catching D. dentex. We also found that the mass of the fish positively predicted social engagement as well as the degree of positive evaluation only in spearfishing videos. This could be caused by the generally smaller odds of catching large D. dentex by spearfishing. Our case study demonstrates that data mining on YouTube can be a powerful tool to provide complementary data on controversial and data-poor aspects of recreational fisheries and contribute to understanding the social dimensions of recreational fishers.