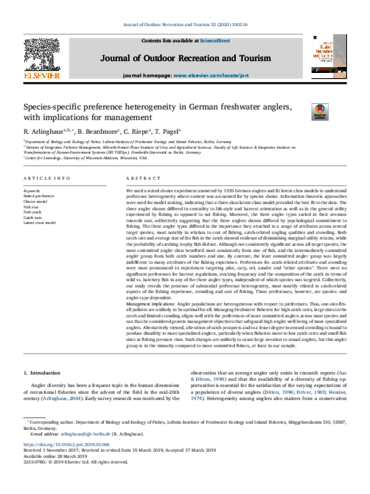 We used a stated choice experiment answered by 1335 German anglers and fit latent class models to understand preference heterogeneity where context was accounted for by species choice. Information theoretic approaches were used for model ranking, indicating that a three-class latent class model provided the best fit to the data. The three angler classes differed in centrality to life-style and harvest orientation as well as in the general utility experienced by fishing as opposed to not fishing. Moreover, the three angler types varied in their aversion towards cost, collectively suggesting that the three anglers classes differed by psychological commitment to fishing. The three angler types differed in the importance they attached to a range of attributes across several target species, most notably in relation to cost of fishing, catch-related angling qualities and crowding. Both catch rate and average size of the fish in the catch showed evidence of diminishing marginal utility returns, while the probability of catching trophy fish did not. Although not consistently significant across all target species, the most committed angler class benefited most consistently from size of fish, and the intermediately committed angler group from both catch numbers and size. By contrast, the least committed angler group was largely indifferent to many attributes of the fishing experience. Preferences for catch-related attributes and crowding were most pronounced in experiences targeting pike, carp, eel, zander and “other species”. There were no significant preferences for harvest regulations, stocking frequency and the composition of the catch in terms of wild vs. hatchery fish in any of the three angler types, independent of which species was targeted. Collectively, our study reveals the presence of substantial preference heterogeneity, most notably related to catch-related aspects of the fishing experience, crowding and cost of fishing. These preferences, however, are species- and angler-type dependent.

Management implications: Angler populations are heterogeneous with respect to preferences. Thus, one-size-fitsall policies are unlikely to be optimal for all. Managing freshwater fisheries for high catch rates, large sizes in the catch and limited crowding aligns well with the preferences of more committed anglers across most species and can thus be considered generic management objectives that safeguard high angler well-being of more specialized anglers. Alternatively viewed, alteration of catch prospects and to a lesser degree increased crowding is bound to produce disutility to more specialized anglers, particularly when fisheries move to low catch rates and small fish sizes as fishing pressure rises. Such changes are unlikely to cause large aversion to casual anglers, but this angler group is in the minority compared to more committed fishers, at least in our sample.