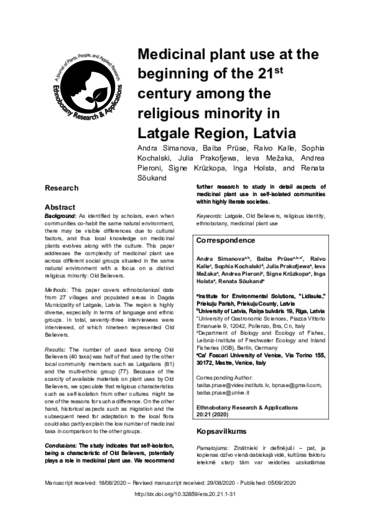 Background: As identified by scholars, even when communities co-habit the same natural environment, there may be visible differences due to cultural factors, and thus local knowledge on medicinal plants evolves along with the culture. This paper addresses the complexity of medicinal plant use across different social groups situated in the same natural environment with a focus on a distinct religious minority: Old Believers.
Methods: This paper covers ethnobotanical data from 27 villages and populated areas in Dagda Municipality of Latgale, Latvia. The region is highly diverse, especially in terms of language and ethnic groups. In total, seventy-three interviewees were interviewed, of which nineteen represented Old Believers.
Results: The number of used taxa among Old Believers (40 taxa) was half of that used by the other local community members such as Latgalians (81) and the multi-ethnic group (77). Because of the scarcity of available materials on plant uses by Old Believers, we speculate that religious characteristics such as self-isolation from other cultures might be one of the reasons for such a difference. On the other hand, historical aspects such as migration and the subsequent need for adaptation to the local flora could also partly explain the low number of medicinal taxa in comparison to the other groups.
Conclusions: The study indicates that self-isolation, being a characteristic of Old Believers, potentially plays a role in medicinal plant use. We recommend