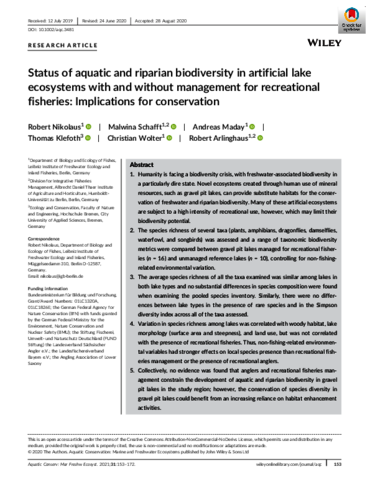 1. Humanity is facing a biodiversity crisis, with freshwater-associated biodiversity in a particularly dire state. Novel ecosystems created through human use of mineral resources, such as gravel pit lakes, can provide substitute habitats for the conservation of freshwater and riparian biodiversity. Many of these artificial ecosystems are subject to a high intensity of recreational use, however, which may limit their biodiversity potential.

3. The average species richness of all the taxa examined was similar among lakes in both lake types and no substantial differences in species composition were found when examining the pooled species inventory. Similarly, there were no differences between lake types in the presence of rare species and in the Simpson diversity index across all of the taxa assessed.