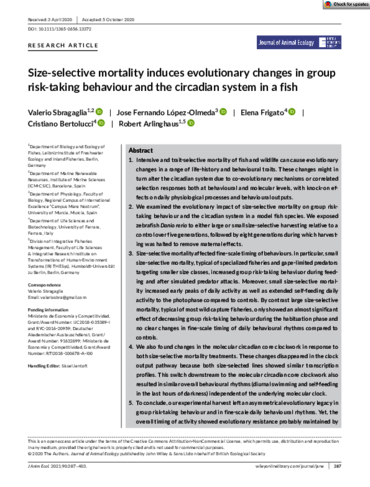 1. Intensive and trait-selective mortality of fish and wildlife can cause evolutionary changes in a range of life-history and behavioural traits. These changes might in turn alter the circadian system due to co-evolutionary mechanisms or correlated selection responses both at behavioural and molecular levels, with knock-on effects on daily physiological processes and behavioural outputs.

2. We examined the evolutionary impact of size-selective mortality on group risktaking behaviour and the circadian system in a model fish species. We exposed zebrafish Danio rerio to either large or small size-selective harvesting relative to a control over five generations, followed by eight generations during which harvesting was halted to remove maternal effects.

4. We also found changes in the molecular circadian core clockwork in response to both size-selective mortality treatments. These changes disappeared in the clock output pathway because both size-selected lines showed similar transcription profiles. This switch downstream to the molecular circadian core clockwork also resulted in similar overall behavioural rhythms (diurnal swimming and self-feeding in the last hours of darkness) independent of the underlying molecular clock.

5. To conclude, our experimental harvest left an asymmetrical evolutionary legacy in group risk-taking behaviour and in fine-scale daily behavioural rhythms. Yet, the overall timing of activity showed evolutionary resistance probably maintained by a molecular switch. Our experimental findings suggest that size selective mortality can have consequences for behaviour and physiological processes.