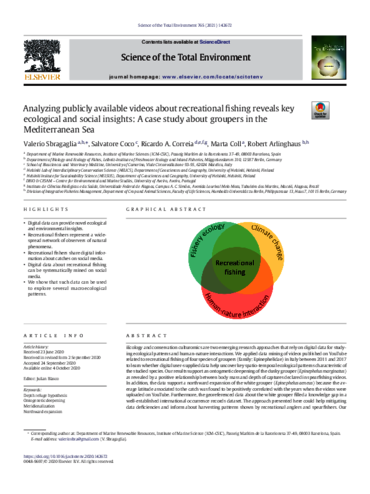 iEcology and conservation culturomics are two emerging research approaches that rely on digital data for studying ecological patterns and human-nature interactions.We applied data mining of videos published on YouTube related to recreational fishing of four species of groupers (family: Epinephelidae) in Italy between 2011 and 2017 to learnwhether digital user-supplied data help uncover key spatio-temporal ecological patterns characteristic of the studied species. Our results support an ontogenetic deepening of the dusky grouper (Epinephelusmarginatus) as revealed by a positive relationship between body mass and depth of captures declared in spearfishing videos. In addition, the data support a northward expansion of the white grouper (Epinephelus aeneus) because the average latitude associated to the catch was found to be positively correlatedwith the years when the videos were uploaded on YouTube. Furthermore, the georeferenced data about the white grouper filled a knowledge gap in a well-established international occurrence records dataset. The approach presented here could help mitigating data deficiencies and inform about harvesting patterns shown by recreational anglers and spearfishers. Our work illustrates the value of digital data associated with recreational fishing for advancing fish and fisheries research. The approach can be broadened to larger spatial and temporal scales, and to different species, contributing to a better understanding ofmacroecological patterns, assessment and conservation of exploited species, and monitoring of recreational fisheries.