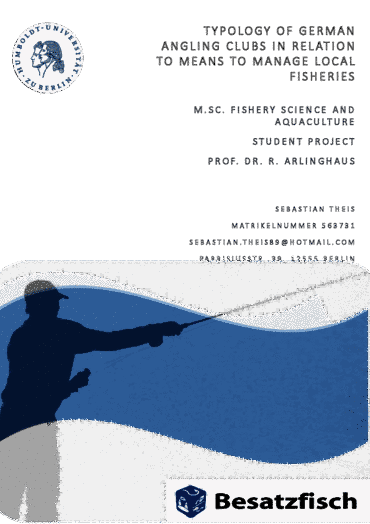 A typology of German angling clubs according to their preferred means to manage water bodies was developed over the course of a student project. The used data set was kindly provided by Projekt Besatzfisch. Part of Projekt Besatzfisch was the conduction of a Germany-wide written survey in 2011. Comprehensive data of 1.222 angling clubs was collected, covering social, economic and stocking relevant information.Preferred management methods of the different clubs were recorded in part of the questionnaire. Using the Ward method, five different groups of angling clubs were distinguished. They were labeled as Laissez faire, Holistic Control, Output Control, Do it all und Habitat clubs. Output control clubs for example implemented daily bagging limits in most of their managed water bodies. The by far most used and omnipresent tool, was fish stocking. The created typology was further extended and complemented by aspects like demography, values and norms or rights regimes. Those information were also provided by the questionnaire. Habitat clubs for instance showed higher environmental awareness than other club types .Overall the results of the student project showed a strong heterogeneity among German angling clubs. Furthermore results underlined the dominant role attributed to fish stocking and hinted various potential conflict sources when interacting with angling clubs.