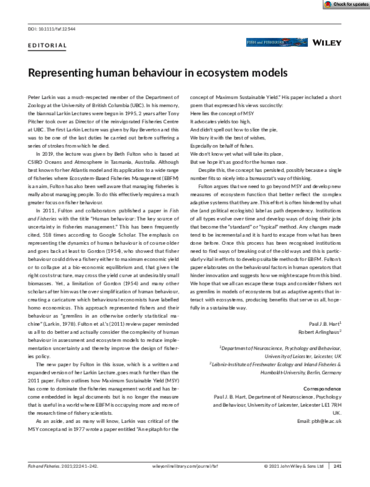 Peter Larkin was a much-respected member of the Department of Zoology at the University of British Columbia (UBC). In his memory, the biannual Larkin Lectures were begun in 1995, 2 years after Tony Pitcher took over as Director of the reinvigorated Fisheries Centre at UBC. The first Larkin Lecture was given by Ray Beverton and this was to be one of the last duties he carried out before suffering a series of strokes from which he died. In 2019, the lecture was given by Beth Fulton who is based at CSIRO Oceans and Atmosphere in Tasmania, Australia. Although best known for her Atlantis model and its application to a wide range of fisheries where Ecosystem-Based Fisheries Management (EBFM) is an aim, Fulton has also been well aware that managing fisheries is really about managing people. To do this effectively requires a much greater focus on fisher behaviour.