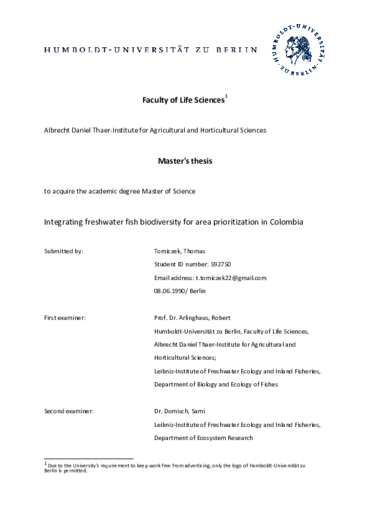 Colombia forms one of the global freshwater biodiversity hotspots, home to 1494 freshwater fish species. This exceptional fish fauna has, however, rarely been considered when selecting areas for biodiversity conservation. This study integrates freshwater fish distributions into a spatial prioritization exercise to assess to which extent (i) freshwater biodiversity, using fish as a proxy, is currently represented within the existing protected areas, and (ii) if alternative protected area networks may have the potential to increase the number of fish species under protection.

At first all available fish data was collated, resulting in a data base of over 112,535 geographic occurrences of 1224 freshwater fishes across Colombia with harmonized nomenclature and revised geo-referenced coordinates.

Based on a digital elevation model at 1 km2 resolution, the stream network was delineated with a minimum catchment size of 90 km2 and extracted the corresponding 33,612 sub-catchments that served as spatial units within the analyses. In the next step fish occurrence data and environmental variables (climate, topography, land cover, hydrology) were aggregated across the sub-catchments and an ensemble of species distribution modelling algorithms was employed to project suitable habitat of each fish species across the study area.

Following the principles of systematic conservation planning, integer linear programming was applied to delineate a hypothetical protected area network that fulfills minimum, predefined conservation targets for each fish species, i.e. maximizing species representativeness and connectivity among river catchments, while minimizing the cost of anthropogenic impact, represented by the human footprint index and required area for protection. This spatial prioritization was carried out for four different conservation targets, set to protect 20 %, 30 %, 40 % and 50 % of each fish species suitable habitats in the priority network.

The projected suitable habitats of freshwater fish show high species richness in the Amazon and Orinoco basins while endemic and threatened fish mainly are projected for the Magdalena-Cauca and Pacific-Choco region.

The calculated total area of the hypothetical priority area network is between 279,077 km2 and 754,400 km2 for the different conservation targets. It represents 12.1 % – 32.6 % of the study area, needed for the conservation of 20 % - 50 % of 1224 Colombian freshwater fish species. Most sub-catchments are prioritized in the Amazon and Orinoco basins and the least in the Caribbean basins. The priority network extents into the neighboring countries of Colombia, signifying the need of transboundary cooperation in freshwater conservation. Between 9.2 % to 28.2 % of Colombia’s protected areas coincide with the projected priority area network. A sensitivity analysis, locking in the existing protected areas in the spatial prioritization solution, reveals a priority area network 16.3 % to 34.7 % larger than that of the minimum cost priority network. It indicates that the existing protected areas inadequately represent freshwater fish in Colombia.

Conservation efforts are best focused on the Magdalena-Cauca and Pacific-Choco basins for the expansion of protected areas, since the majority of endemic and threatened fish species occurs within those basins. This thesis represents a first important step in the integration of freshwater biodiversity for spatial area prioritization and can serve as a baseline scenario for future conservation planning exercises in Colombia.