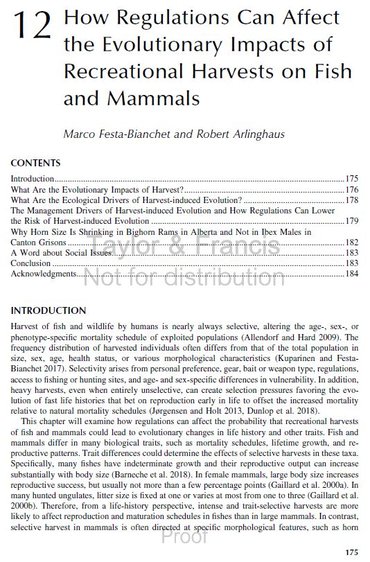 Harvest of fish and wildlife by humans is nearly always selective, altering the age-, sex-, or phenotype-specific mortality schedule of exploited populations (Allendorf and Hard 2009). The frequency distribution of harvested individuals often differs from that of the total population in size, sex, age, health status, or various morphological characteristics (Kuparinen and Festa-Bianchet 2017). Selectivity arises from personal preference, gear, bait or weapon type, regulations, access to fishing or hunting sites, and age- and sex-specific differences in vulnerability. In addition, heavy harvests, even when entirely unselective, can create selection pressures favoring the evolution of fast life histories that bet on reproduction early in life to offset the increased mortality relative to natural mortality schedules (Jørgensen and Holt 2013, Dunlop et al. 2018).

This chapter will examine how regulations can affect the probability that recreational harvests of fish and mammals could lead to evolutionary changes in life history and other traits. Fish and mammals differ in many biological traits, such as mortality schedules, lifetime growth, and reproductive patterns. Trait differences could determine the effects of selective harvests in these taxa. Specifically, many fishes have indeterminate growth and their reproductive output can increase substantially with body size (Barneche et al. 2018). In female mammals, large body size increases reproductive success, but usually not more than a few percentage points (Gaillard et al. 2000a). In many hunted ungulates, litter size is fixed at one or varies at most from one to three (Gaillard et al. 2000b). Therefore, from a life-history perspective, intense and trait-selective harvests are more likely to affect reproduction and maturation schedules in fishes than in large mammals. In contrast, selective harvest in mammals is often directed at specific morphological features, such as horn size—a type of selective harvest not found in recreational fishing, where body size is often a key target (Beardmore et al. 2015). Hence, we expect that harvest-induced evolution will mostly affect morphological traits desired by hunters in mammals, whereas a range of traits may evolve in recreational fisheries (Matsumura et al. 2011, Arlinghaus et al. 2017b). In fishes, there is ample experimental and modeling evidence that body size can be affected by intense, persistent, and selective harvests (Conover and Munch 2002, Edeline et al. 2009, Ahti et al. 2020). In both mammals and fishes, selective harvesting can also drive behavioral changes (Arlinghaus et al. 2017b, Leclerc et al. 2017).