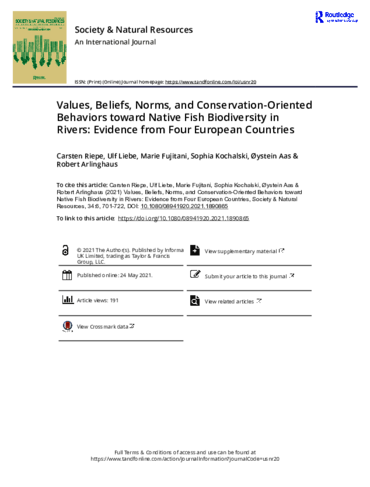 Riverine biodiversity in Europe is under threat from a range of anthropogenic factors. Key to effective biodiversity conservation is the public’s willingness to support restoration efforts. Based on value-belief-norm (VBN) theory and using a longitudinal survey design with n = 1,000 respondents per each of four countries (France, Germany, Norway, Sweden) we measured individual conservation-oriented behaviors in natural settings over time (e.g., signing a petition, donating money) that benefit native river fish biodiversity. We also examined sociopsychological determinants of these behaviors. In addition to behavioral intentions and self-reported behaviors, we measured actual behavior (monetary donations). We found broad support for the VBN theory but also relevant cultural diversity. In France, Norway, and Sweden fish value orientations affected conservation-oriented behaviors, whereas in Germany general ecological worldviews had more explanatory power. Conservation-oriented outreach and information campaigns will be most effective when taking between-country differences in the relationship between beliefs and behaviors into account.