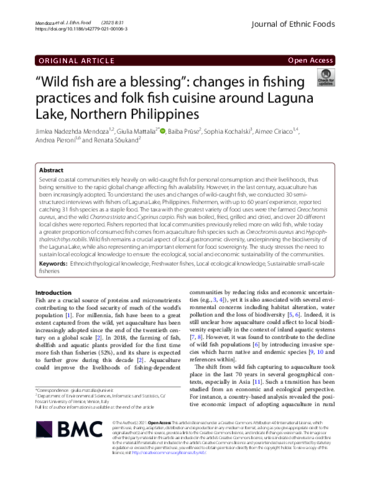 Several coastal communities rely heavily on wild-caught fish for personal consumption and their livelihoods, thus being sensitive to the rapid global change affecting fish availability. However, in the last century, aquaculture has been increasingly adopted. To understand the uses and changes of wild-caught fish, we conducted 30 semistructured interviews with fishers of Laguna Lake, Philippines. Fishermen, with up to 60 years’ experience, reported catching 31 fish species as a staple food. The taxa with the greatest variety of food uses were the farmed Oreochromis aureus, and the wild Channa striata and Cyprinus carpio. Fish was boiled, fried, grilled and dried, and over 20 different local dishes were reported. Fishers reported that local communities previously relied more on wild fish, while today a greater proportion of consumed fish comes from aquaculture fish species such as Oreochromis aureus and Hypophthalmichthys nobilis. Wild fish remains a crucial aspect of local gastronomic diversity, underpinning the biodiversity of the Laguna Lake, while also representing an important element for food sovereignty. The study stresses the need to sustain local ecological knowledge to ensure the ecological, social and economic sustainability of the communities.