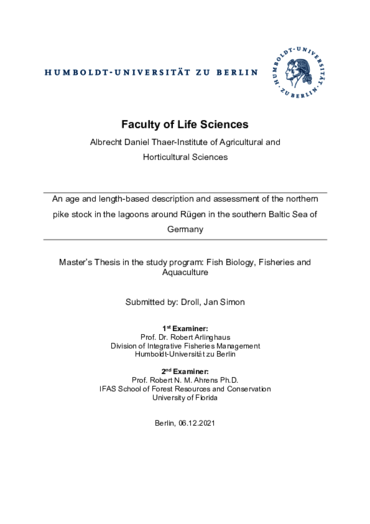 The northern pike (Esox lucius) is a big freshwater fish with a medium lifespan that also inhabits the oligo- to mesohaline inner coastal lagoons around the island of Rügen, the so-called “Bodden”. The pike stock in this coastal area is co-exploited by commercial fishers and recreational anglers. Like most coastal fish stocks, the northern pike population around Rügen is considered data-poor, and like for many other datapoor fisheries, only data on commercial landings is available. The available landing data was used to calculate the catch per unit effort (CPUE) based on the number of boats per area. If CPUE is meant to be used to measure abundance, it is essential to understand how the environment affects catches. The five environmental variables, total phosphorus, turbidity, salinity, temperature, and chlorophyll-a were used together with the commercial CPUE in the empirical dynamic modeling (EDM) framework to determine if they had a causal effect on catches or not. It was found that for most areas, total phosphorus and turbidity played a significant role, whereas temperature was only found to have a causal effect for one area. Because the used CPUE index, taking the numbers of boats per area as effort index, is rather inexactly the estimated commercial CPUE was rather not proportional to abundance. Length-based stock assessment models were used in this case to get better information on the stock status because they can work with just a fraction of length information on the catch. Besides information on length-frequencies of catch, length-based stock assessment models require information on growth, length-weight relationship, natural mortality, and length at maturation, which were estimated for the pike population in the area. Growth, natural mortality, and the length-weight relationship were also used to compare the brackish water pike population with pike coming from freshwater tributaries in the area, showing that growth was the only factor that differed between freshwater and brackish water pike. Two different length-based stock assessment models, LBSPR and LIME, were used to assess the spawning potential ratio (SPR), which was used as a reference point. The results of the length-based stock assessment showed that the pike stock around the island of Rügen is not overfished yet. Nevertheless, the stock is in a state where the first signs of a heavily exploited stock might occur, e.g., growth overfishing.