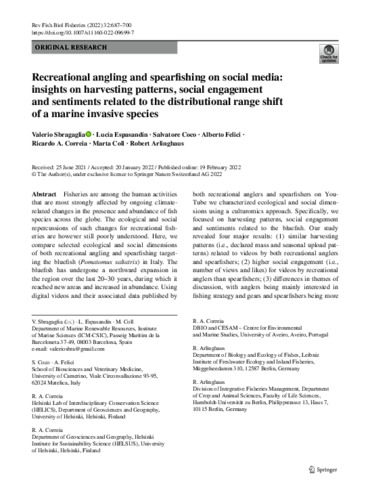 Fisheries are among the human activities that are most strongly affected by ongoing climaterelated changes in the presence and abundance of fish species across the globe. The ecological and social repercussions of such changes for recreational fisheries are however still poorly understood. Here, we compare selected ecological and social dimensions of both recreational angling and spearfishing targeting the bluefish (Pomatomus saltatrix) in Italy. The bluefish has undergone a northward expansion in the region over the last 20–30 years, during which it reached new areas and increased in abundance. Using digital videos and their associated data published by both recreational anglers and spearfishers on YouTube we characterized ecological and social dimensions using a culturomics approach. Specifically, we focused on harvesting patterns, social engagement and sentiments related to the bluefish. Our study revealed four major results: (1) similar harvesting patterns (i.e., declared mass and seasonal upload patterns) related to videos by both recreational anglers and spearfishers; (2) higher social engagement (i.e.,number of views and likes) for videos by recreational anglers than spearfishers; (3) differences in themes of discussion, with anglers being mainly interested in fishing strategy and gears and spearfishers being more interested in fishing actions shown on the videos; (4) positive and negative sentiments of both recreational anglers and spearfishers towards the invasiveness and aggressiveness of the species. The latter represents an interesting trade-off associated with recreational fishing of the bluefish: it is perceived as an invasive species, but it is also a valued target fish because its voracity contributes to the quality of the recreational fishing experience. Our study showcases the value of exploring social media and associated data to better understand the ecological and human dimensions of marine recreational fisheries in relation to distributional range shifts of species associated with climate change.