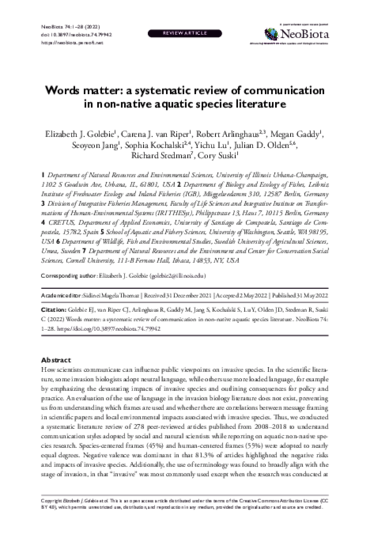 How scientists communicate can influence public viewpoints on invasive species. In the scientific literature, some invasion biologists adopt neutral language, while others use more loaded language, for example by emphasizing the devastating impacts of invasive species and outlining consequences for policy and practice. An evaluation of the use of language in the invasion biology literature does not exist, preventing us from understanding which frames are used and whether there are correlations between message framing in scientific papers and local environmental impacts associated with invasive species. Thus, we conducted a systematic literature review of 278 peer-reviewed articles published from 2008–2018 to understand communication styles adopted by social and natural scientists while reporting on aquatic non-native species research. Species-centered frames (45%) and human-centered frames (55%) were adopted to nearly equal degrees. Negative valence was dominant in that 81.3% of articles highlighted the negative risks and impacts of invasive species. Additionally, the use of terminology was found to broadly align with the stage of invasion, in that “invasive” was most commonly used except when the research was conducted at early stages of invasion, when “non-native” was most commonly used. Terminology use therefore enables readers of scientific papers to infer the status and severity of ongoing invasions. Given that science communication within the peer-reviewed literature affects public understanding of research outcomes, these findings provide an important point of reflection for researchers.