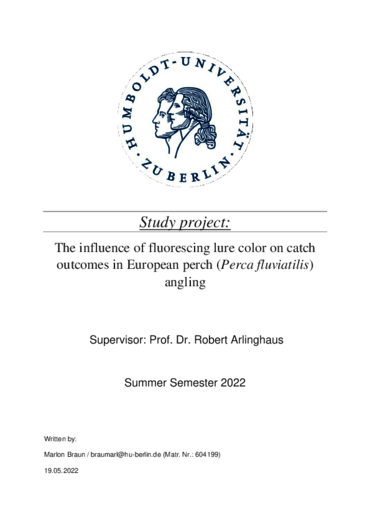 Anglers use different colors in hopes of increasing the vulnerability of fishes to their lure. Colors which frequently are sold to anglers include fluorescent colors. Anecdotal evidence, especially within angler communities, suggest that the usage of fluorescent colors might increase the catch rate in dim light conditions or at high turbidities by increasing the conspicuousness of the lure. However, neither the fluorescent properties of these lure colors nor the effects they have on the catch rate have been scientifically assessed. Moreover, while successful catch and release management of fisheries depends on high survival rates of the released fish, the effect of these colors on the hooking depth in the fish's mouth or the probability of inflicting injuries upon the fish are still unresearched. A field study was conducted in three waterbodies assessing the catch-per-unit-effort (CPUE) and the probability of deep hooking or bleeding of two lure colors (one fluorescent, one non fluorescent) with equal reflective spectra, in relation to the light intensity above the water level, cloud cover, water depth, Secchi depth, daytime, lure size and position on a two-lure fishing rig. Further, to characterize the fluorescent lure colors fished by anglers 16 commercially available lures were analyzed regarding their fluorescent properties to discuss these in the light of their relevance in varying environmental conditions. In total about 400 fish were captured of which over 80 percent were European perch (Perca fluviatilis). About half of the fish were caught on the fluorescent color. Fluorescent lure color did not increase the perch CPUE in dim light conditions or at high turbidities compared to a non fluorescent color. In one study lake, a strong tendency was observed for the CPUEs of the two lure colors to differ in relation to water depth. The perch CPUE decreased stronger with increasing fishing depth for the non fluorescent color compared to the fluorescent color. Generally, the perch CPUE was related to fishing depth, light intensity, cloud cover, lure size and position on a fishing rig. The perch CPUE increased with increasing light intensity and cloud cover, while decreasing with increasing fishing depth. A smaller lure size and a bottom position on a fishing rig had a higher perch CPUE compared to a bigger lure size and the top position on the fishing rig. Lure color did not affect hooking depth or the probability of bleeding fish. Based on the results of the present field experiment there is no catch enhancing effect of fluorescent lure colors in perch angling in the observed water bodies.