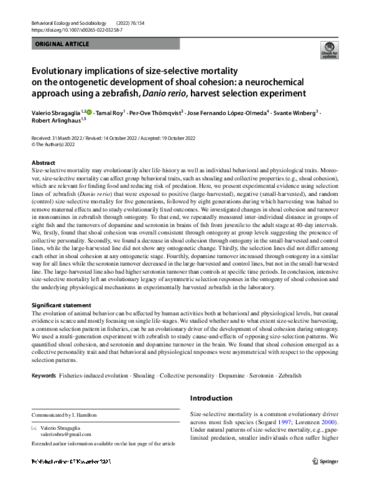 Size-selective mortality may evolutionarily alter life-history as well as individual behavioral and physiological traits. Moreover, size-selective mortality can affect group behavioral traits, such as shoaling and collective properties (e.g., shoal cohesion), which are relevant for finding food and reducing risk of predation. Here, we present experimental evidence using selection lines of zebrafish (Danio rerio) that were exposed to positive (large-harvested), negative (small-harvested), and random (control) size-selective mortality for five generations, followed by eight generations during which harvesting was halted to remove maternal effects and to study evolutionarily fixed outcomes. We investigated changes in shoal cohesion and turnover in monoamines in zebrafish through ontogeny. To that end, we repeatedly measured inter-individual distance in groups of eight fish and the turnovers of dopamine and serotonin in brains of fish from juvenile to the adult stage at 40-day intervals. We, firstly, found that shoal cohesion was overall consistent through ontogeny at group levels suggesting the presence of collective personality. Secondly, we found a decrease in shoal cohesion through ontogeny in the small-harvested and control lines, while the large-harvested line did not show any ontogenetic change. Thirdly, the selection lines did not differ among each other in shoal cohesion at any ontogenetic stage. Fourthly, dopamine turnover increased through ontogeny in a similar way for all lines while the serotonin turnover decreased in the large-harvested and control lines, but not in the small-harvested line. The large-harvested line also had higher serotonin turnover than controls at specific time periods. In conclusion, intensive size-selective mortality left an evolutionary legacy of asymmetric selection responses in the ontogeny of shoal cohesion and the underlying physiological mechanisms in experimentally harvested zebrafish in the laboratory.