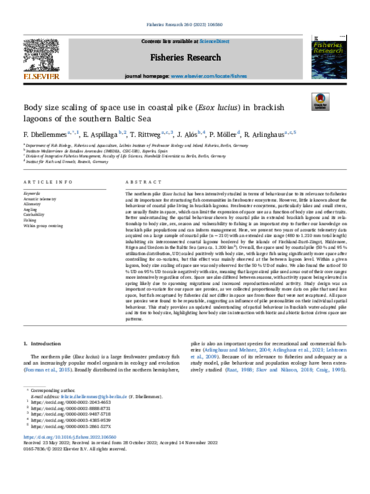 The northern pike (Esox lucius) has been intensively studied in terms of behaviour due to its relevance to fisheries and its importance for structuring fish communities in freshwater ecosystems. However, little is known about the behaviour of coastal pike living in brackish lagoons. Freshwater ecosystems, particularly lakes and small rivers, are usually finite in space, which can limit the expression of space use as a function of body size and other traits. Better understanding the spatial behaviour shown by coastal pike in extended brackish lagoons and its relationship to body size, sex, season and vulnerability to fishing is an important step to further our knowledge on brackish pike populations and can inform management. Here, we present two years of acoustic telemetry data acquired on a large sample of coastal pike (n = 210) with an extended size range (480 to 1.210 mm total length) inhabiting six interconnected coastal lagoons bordered by the islands of Fischland-Darß-Zingst, Hiddensee, Rügen and Usedom in the Baltic Sea (area ca. 1.200 km2). Overall, the space used by coastal pike (50 % and 95 % utilization distribution, UD) scaled positively with body size, with larger fish using significantly more space after controlling for co-variates, but this effect was mainly observed at the between lagoon level. Within a given lagoon, body size scaling of space use was only observed for the 50 % UD of males. We also found the ratio of 50 % UD on 95 % UD to scale negatively with size, meaning that larger-sized pike used areas out of their core ranges more intensively regardless of sex. Space use also differed between seasons, with activity spaces being elevated in spring likely due to spawning migrations and increased reproduction-related activity. Study design was an important co-variate for our space use proxies, as we collected proportionally more data on pike that used less space, but fish recaptured by fisheries did not differ in space use from those that were not recaptured. All space use proxies were found to be repeatable, suggesting an influence of pike personalities on their individual spatial behaviour. This study provides an updated understanding of spatial behaviour in Brackish water-adapted pike and its ties to body size, highlighting how body size in interaction with biotic and abiotic factors drives space use patterns.