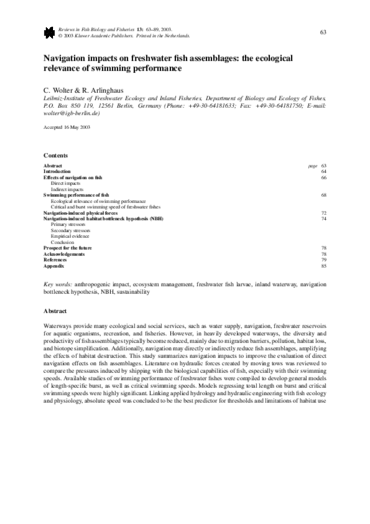 Waterways provide many ecological and social services, such as water supply, navigation, freshwater reservoirs for aquatic organisms, recreation, and fisheries. However, in heavily developed waterways, the diversity and productivity of fish assemblages typically become reduced, mainly due to migration barriers, pollution, habitat loss, and biotope simplification. Additionally, navigation may directly or indirectly reduce fish assemblages, amplifying the effects of habitat destruction. This study summarizes navigation impacts to improve the evaluation of direct navigation effects on fish assemblages. Literature on hydraulic forces created by moving tows was reviewed to compare the pressures induced by shipping with the biological capabilities of fish, especially with their swimming speeds. Available studies of swimming performance of freshwater fishes were compiled to develop general models of length-specific burst, as well as critical swimming speeds. Models regressing total length on burst and critical swimming speeds were highly significant. Linking applied hydrology and hydraulic engineering with fish ecology and physiology, absolute speed was concluded to be the best predictor for thresholds and limitations of habitat use by fish. A navigation-induced habitat bottleneck hypothesis (NBH) was inferred from the threshold flow velocity, determining habitat availability for fish. According to the NBH presented here, swimming performance of juvenile freshwater fish is the major bottleneck for fish recruitment in waterways, as a result of their inability to with standbank-directed navigation-induced physical forces. In essence, under common navigation conditions, with respect to inland waterway morphology, channel cross section, vessel speeds, and dimensions of commercial vessels, the navigation-induced return currents along the shore are usually around 0.8 m s−1 (0.7–1.0 m s−1) accompanied by a 0.1–0.3 m drawdown. Under such conditions, the proposed threshold for small fish survival was estimated to be 147 mm total length at critical swimming performance (>20 s – 60 min without fatigue) and 47 mm at burst performance (<20 s). These theoretical findings were supported by empirical studies of fish recruitment in waterways. The strong dependence of fish recruitment on hydraulic forces opens up possibilities of formulating suitable criteria for safe ship operation (speed and distance to bank), as well as for effective fairway management (construction and maintenance) and sustainable fish conservation (species and production). A more ecologically orientated hydraulic engineering will not constrain commercial navigation and their socioeconomic benefits, but it will substantially enhance fish recruitment in waterways and their ecological sustainability, for the overall benefit of fish, fisheries, and society.