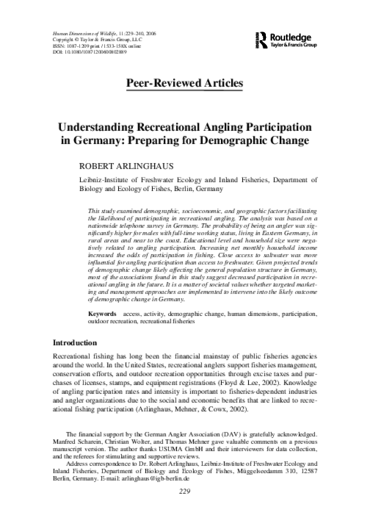 This study examined demographic, socioeconomic, and geographic factors facilitating the likelihood of participating in recreational angling. The analysis was based on a nationwide telephone survey in Germany. The probability of being an angler was significantly higher for males with full-time working status, living in Eastern Germany, in rural areas and near to the coast. Educational level and household size were negatively related to angling participation. Increasing net monthly household income increased the odds of participation in fishing. Close access to saltwater was more influential for angling participation than access to freshwater. Given projected trends of demographic change likely affecting the general population structure in Germany, most of the associations found in this study suggest decreased participation in recreational angling in the future. It is a matter of societal values whether targeted marketing and management approaches are implemented to intervene into the likely outcome of demographic change in Germany.