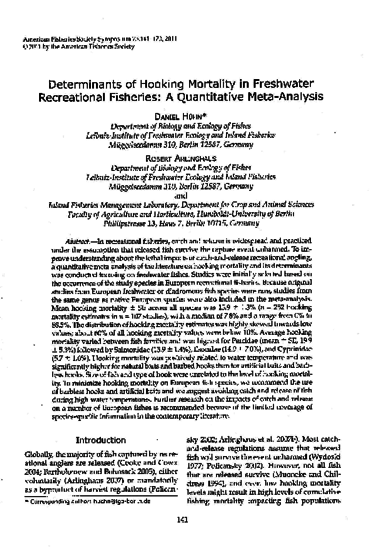 In recreational fisheries, catch and release is widespread and practiced under the assumption that released fish survive the capture event unharmed. To improve understanding about the lethal impacts of catch-and-release recreational angling, a quantitative meta-analysis of the literature on hooking mortality and its determinants was conducted focusing on freshwater or diadromous fish species were rare, studies from the same genus as native European species were also included in the meta-analysis. Mean hooking mortality +/- SE across all species was 15,9 +/- 1,3% (n = 252 hooking mortality estimates in n = 107 studies), with a median of 7,8% and a range from 0% to 88,5%. The distribution of hooking mortality estimates was highly skewed towards low values, about 60% of all hooking mortality was positively related to water temperature and was significantly higher for natural baits and barbed hooks than for artifical baits and barbless hooks. Size of fish and type of hook were unrelated to the level of hooking mortality. To minimize hooking mortality on European fish species, we recommend the use of barbless hooks and artificial baits and we suggest avoiding catch and release of fish during high water temperatures. Further research on the impacts of catch and release on a number of European fishes is recommended because of the limited coverage of species-specifiv information in the contemporary literature.