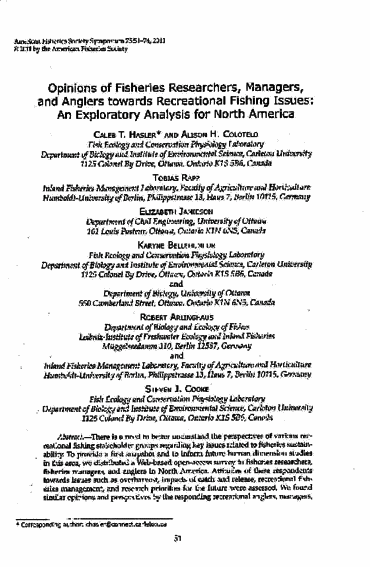 There is a need to better understand the perspectives of various recreational fishing stakeholder groups regarding key issues related to fisheries sustainability. To provide a first snapshot and to inform future human dimension studies in this area, we distirbuted a Web-based open-access survey to fisheries researchers, fisheries managers, and anglers in North America. Attitudes of these respondents towards issues such as overharvest, impacts of catch and release, recreational fisheries management, and research priorities for the future were assessed. We found similar opinions and perspectives by the responding recreational anglers, managers, and researchers on a number of issues, such as the perceived impact of commercial fishing contributing to fish stock declines, the perceived importance of using and promoting gear, that minimizes stress and injury to individual fish when fish are to be released, and the belief that conflicts among stakeholders is growing as is the gloabel anti-fishing movement based on animals rights thinking. Differences among responding groups included that researchers tended to be more concerned than anglers and managers with the potential of recreational angling contributing to fish stock declines. Responding anglers were also less content with their involvement in the fisheries management provess than were responding managers and researchers, and these anglers also indicated a greater desire for more human dimensions research on understanding angler attitudes and behavior than was evident for responding managers and researchers. This preliminary survey revealed some variation in attitudes among recreational fisheries stakeholders. However, due to lack of random sampling