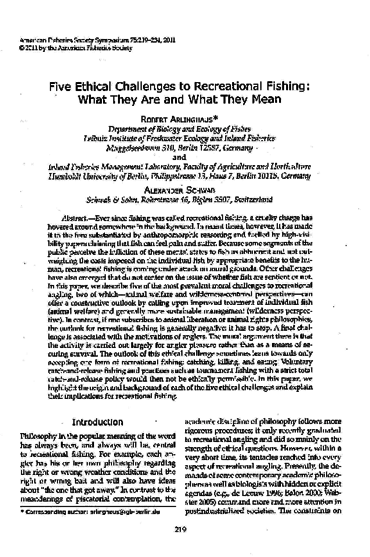 Ever since fishing was called recreational fishing, a cruelty charge has hovered aroung somewhere in the background. In recent times, however, it has made it to the fore substantiated by anthropomorphic reasoning and fuelled by high-visibility papers claiming that fish can feel pain and suffer. Because some segments of the public perceive the infliction of these mental states to fish as abhorrent and not outweighing the costs imposed on the individual fish by appropriate benefits to the human, recreational fishing is coming under attack on moral grounds. Other challenges have also emerged that do not center on the issue of whether fish are sentient or not. In this paper, we describe five of the most prevalent moral challenges to recreational angling, two of which-animal welfare and wilderness-centered perspectives-can offer a constructive outlook by calling upon improved treatment of individual fish (Animal welfare) and generally more sustainable management (wilderness perspective). In contrast, of one subscribes to animal liberation or animal rights philosophies, the outlook for recreational fishing is generally negative: it has to stop. A final challenge is associated with the motivations of anglers. The moral argument there is that the activity is carried out largely for angler pleasure rather than as a means of securing survival. The outlook of this ethical challenge sometimes leans towards only accepting one from of recreational fishing: catching, killing, and eating. Voluntary catch-and-release fishing and practices such as tournament fishing with a strict total catch-and-release policy would then not be ethically permissible. In this paper, we highlight the origin and background of each of the five ethical challenges and explain their implications for recreational fishing.

Arlinghaus, R., Schwab, A. (2011). Five ethical challenges to recreational fishing: what they are and what they mean. American Fisheries Society Symposium, 75, 219-234