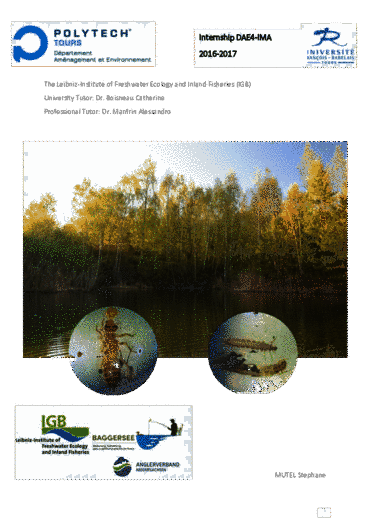 This report is a part of a larger study lead by the Leibniz-Institute of Freshwater Ecology and Inland Fisheries (IGB) and conducted within the “Baggersee Project”. The main aim of the project is to assess freshwater biodiversity in gravel pit lakes in Lower Saxony region in Germany. Biodiversity of fish, birds, amphibians, dragonflies and macroinvertebrate communities was assessed to gain important information about sustainable management conducted in an ecological way which can improve ecosystem biodiversity. The project included 20 lakes which were managed or owned by angling clubs. Of the 20 lakes, four lakes are characterized by fish stocking, four are untouched, but used for fishing while other four lakes are untouched and preserved from any anthropic pressure including fishing. In other four lakes dead wood (as cut trees) will be introduced close to the shoreline. Finally in the last group of four lakes dead woods will be introduced in combination with the creation of shallow areas. In 5 years from now a new sampling campaign will be performed in order to assess the effect of the increased habitat diversity on the animal biodiversity. The study described in this report assessed macroinvertebrate communities in the gravel pit lakes before management was performed. This was done to have an idea of the initial condition of the macroinvertebrate communities. AESHNA/LIMCO micro-habitat sampling method was used to collect macroinvertebrate samples. In this study we analysed three lakes selected from the 20 lakes based on environmental and morphometric conditions of the lakes. Principal Component Analysis (PCA) was used to select the three lakes. Consequently, we used analysis of the variance (ANOVA) and permutational multivariate analysis of the variance (perMANOVA) and non-parametric multidimensional scaling (nMDS) plots to compare abundance and composition among lakes and microhabitats, respectively. Our results showed that higher number of macroinvertebrates was found in mineral (e.g. sand) microhabitats compared to biotic (e.g. submerged, emerged macrophytes etc.) microhabitats. In contrast, taxa richness was higher in the biotic microhabitats. Community composition analysis showed that different taxa were inhabiting different microhabitats and different lakes giving important insight on animal distribution at different spatial scales. This study represent an important starting point for a consequent larger scale analysis including the all 20 lakes assessed in the project and two phases: before and after the introduction of the habitat improvement modifications. Analysis performed in this study can be used similarly upscaling to larger spatial and temporal scales.