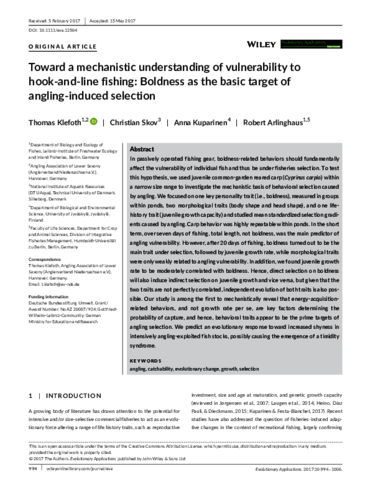 In passively operated fishing gear, boldness-related behaviors should fundamentally affect the vulnerability of individual fish and thus be under fisheries selection. To test this hypothesis, we used juvenile common-garden reared carp (Cyprinus carpio) within a narrow size range to investigate the mechanistic basis of behavioral selection caused by angling. We focused on one key personality trait (i.e., boldness), measured in groups within ponds, two morphological traits (body shape and head shape), and one life-history trait (juvenile growth capacity) and studied mean standardized selection gradients caused by angling. Carp behavior was highly repeatable within ponds. In the short term, over seven days of fishing, total length, not boldness, was the main predictor of angling vulnerability. However, after 20 days of fishing, boldness turned out to be the main trait under selection, followed by juvenile growth rate, while morphological traits were only weakly related to angling vulnerability. In addition, we found juvenile growth rate to be moderately correlated with boldness. Hence, direct selection on boldness will also induce indirect selection on juvenile growth and vice versa, but given that the two traits are not perfectly correlated, independent evolution of both traits is also possible. Our study is among the first to mechanistically reveal that energy-acquisition-related behaviors, and not growth rate per se, are key factors determining the probability of capture, and hence, behavioral traits appear to be the prime targets of angling selection. We predict an evolutionary response toward increased shyness inintensively angling-exploited fish stocks, possibly causing the emergence of a timidity syndrome.