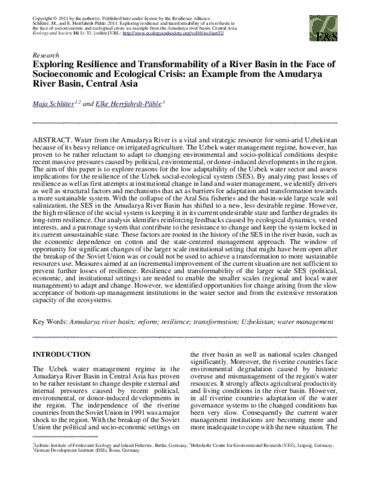 Water from the Amudarya River is a vital and strategic resource for semi-arid Uzbekistan because of its heavy reliance on irrigated agriculture. The Uzbek water management regime, however, has proven to be rather reluctant to adapt to changing environmental and socio-political conditions despite recent massive pressures caused by political, environmental, or donor-induced developments in the region. The aim of this paper is to explore reasons for the low adaptability of the Uzbek water sector and assess implications for the resilience of the Uzbek social-ecological system (SES). By analyzing past losses of resilience as well as first attempts at institutional change in land and water management, we identify drivers as well as structural factors and mechanisms that act as barriers for adaptation and transformation towards a more sustainable system. With the collapse of the Aral Sea fisheries and the basin-wide large scale soil salinization, the SES in the Amudarya River Basin has shifted to a new, less desirable regime. However,the high resilience of the social system is keeping it in its current undesirable state and further degrades its long-term resilience. Our analysis identifies reinforcing feedbacks caused by ecological dynamics, vestedinterests, and a patronage system that contribute to the resistance to change and keep the system locked in its current unsustainable state. These factors are rooted in the history of the SES in the river basin, such as the economic dependence on cotton and the state-centered management approach. The window of opportunity for significant changes of the larger scale institutional setting that might have been open after the breakup of the Soviet Union was or could not be used to achieve a transformation to more sustainable resources use. Measures aimed at an incremental improvement of the current situation are not sufficient to prevent further losses of resilience. Resilience and transformability of the larger scale SES (political, economic, and institutional settings) are needed to enable the smaller scales (regional and local water management) to adapt and change. However, we identified opportunities for change arising from the slow acceptance of bottom-up management institutions in the water sector and from the extensive restoration capacity of the ecosystems.

Schlüter, M., Herrfahrdt-Pähle, E. (2011). Exploring resilience and transformability of a river basin in the face of socioeconomic and ecological crisis: an example from the Amudarya River Basin, Central Asia. Ecology and Society, 16(1), 32