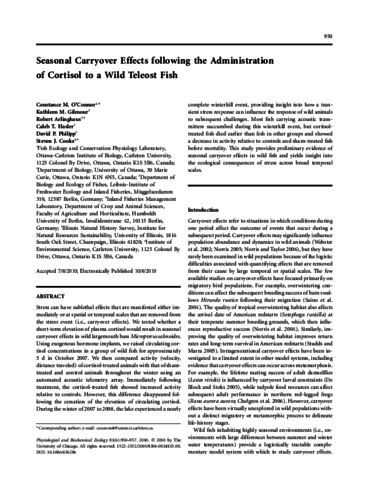 Stress can have sublethal effects that are manifested either immediately or at spatial or temporal scales that are removed from the stress event (i.e., carryover effects). We tested whether a short-term elevation of plasma cortisol would result in seasonal carryover effects in wild largemouth bass Micropterus salmoides. Using exogenous hormone implants, we raised circulating cortisol concentrations in a group of wild fish for approximately5 d in October 2007. We then compared activity (velocity, distance traveled) of cortisol-treated animals with that of sham-treated and control animals throughout the winter using an automated acoustic telemetry array. Immediately following treatment, the cortisol-treated fish showed increased activity relative to controls. However, this difference disappeared following the cessation of the elevation of circulating cortisol. During the winter of 2007 to 2008, the lake experienced a nearly complete winterkill event, providing insight into how a transient stress response can influence the response of wild animals to subsequent challenges. Most fish carrying acoustic transmitters succumbed during this winterkill event, but cortisol-treated fish died earlier than fish in other groups and showed a decrease in activity relative to controls and sham-treated fish before mortality. This study provides preliminary evidence of seasonal carryover effects in wild fish and yields insight intothe ecological consequences of stress across broad temporal scales.