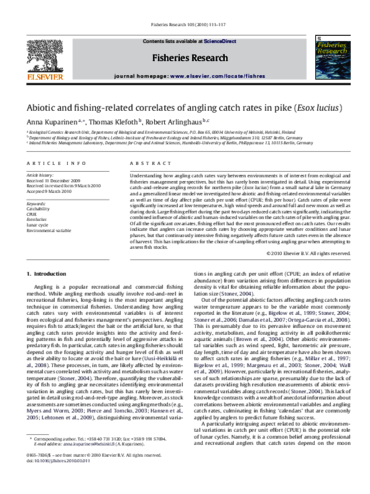 Understanding how angling catch rates vary between environments is of interest from ecological and fisheries management perspectives, but this has rarely been investigated in detail. Using experimental catch-and-release angling records for northern pike (Esox lucius) from a small natural lake in Germany and a generalized linear model we investigated how abiotic and fishing-related environmental variables as well as time of day affect pike catch per unit effort (CPUE; fish per hour). Catch rates of pike were significantly increased at low temperatures, high wind speeds and around full and new moon as well as during dusk. Large fishing effort during the past two days reduced catch rates significantly, indicating the combined influence of abiotic and human-induced variables on the catch rates of pike with angling gear. Of all the significant covariates, fishing effort had the most pronounced effect on catch rates. Our results indicate that anglers can increase catch rates by choosing appropriate weather conditions and lunar phases, but that continuously intensive fishing negatively affects future catch rates even in the absence of harvest. This has implications for the choice of sampling effort using angling gear when attempting to assess fish stocks.