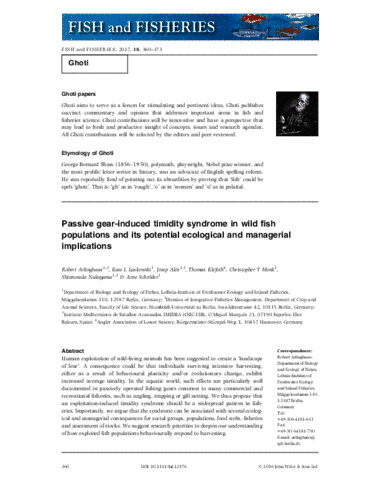 Human exploitation of wild-living animals has been suggested to create a ‘landscapeof fear’. A consequence could be that individuals surviving intensive harvesting,either as a result of behavioural plasticity and/or evolutionary change, exhibit increased average timidity. In the aquatic world, such effects are particularly well documented in passively operated fishing gears common to many commercial and recreational fisheries, such as angling, trapping or gill netting. We thus propose that an exploitation-induced timidity syndrome should be a wide spread pattern in fisheries. Importantly, we argue that the syndrome can be associated with several ecologicaland managerial consequences for social groups, populations, food webs, fisheriesand assessment of stocks. We suggest research priorities to deepen our understanding of how exploited fish populations behaviourally respond to harvesting.