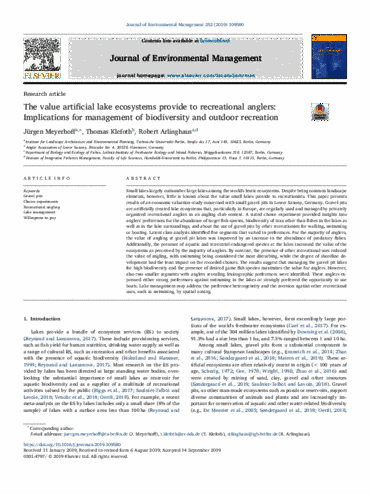 Small lakes largely outnumber large lakes among the world's lentic ecosystems. Despite being common landscape elements, however, little is known about the value small lakes provide to recreationists. This paper presents results of an economic valuation study concerned with small gravel pits in Lower Saxony, Germany. Gravel pits are artificially created lake ecosystems that, particularly in Europe, are regularly used and managed by privately organized recreational anglers in an angling club context. A stated choice experiment provided insights into anglers' preferences for the abundance of target fish species, biodiversity of taxa other than fishes in the lakes as well as in the lake surroundings, and about the use of gravel pits by other recreationists for walking, swimming or boating. Latent class analysis identified five segments that varied in preferences. For the majority of anglers, the value of angling at gravel pit lakes was improved by an increase in the abundance of predatory fishes. Additionally, the presence of aquatic and terrestrial endangered species at the lakes increased the value of the ecosystems as perceived by the majority of anglers. By contrast, the presence of other recreational uses reduced the value of angling, with swimming being considered the most disturbing, while the degree of shoreline development had the least impact on the recorded choices. The results suggest that managing the gravel pit lakes for high biodiversity and the presence of desired game fish species maximizes the value for anglers. However, also two smaller segments with anglers revealing lexicographic preferences were identified. These anglers expressed either strong preferences against swimming in the lakes or strongly preferred the opportunity to use boats. Lake management may address the preference heterogeneity and the aversion against other recreational uses, such as swimming, by spatial zoning.