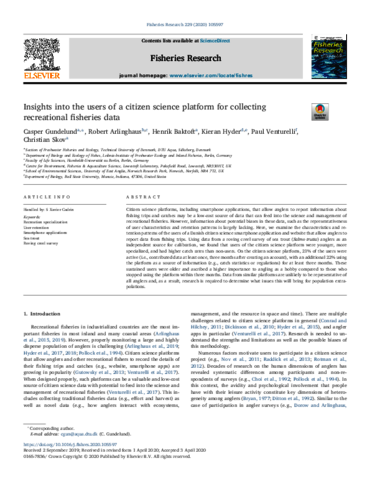 Citizen science platforms, including smartphone applications, that allow anglers to report information about fishing trips and catches may be a low-cost source of data that can feed into the science and management of recreational fisheries. However, information about potential biases in these data, such as the representativeness of user characteristics and retention patterns is largely lacking. Here, we examine the characteristics and retention patterns of the users of a Danish citizen science smartphone application and website that allow anglers to report data from fishing trips. Using data from a roving creel survey of sea trout (Salmo trutta) anglers as an independent source for calibration, we found that users of the citizen science platform were younger, more specialized, and had higher catch rates than non-users. On the citizen science platform, 21% of the users were active (i.e., contributed data at least once, three months after creating an account), with an additional 22% using the platform as a source of information (e.g., catch statistics or regulations) for at least three months. These sustained users were older and ascribed a higher importance to angling as a hobby compared to those who stopped using the platform within three months. Data from similar platforms are unlikely to be representative of all anglers and, as a result, research is required to determine what issues this will bring for population extrapolations.