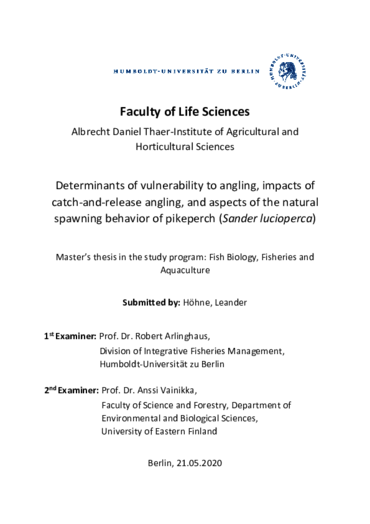 Nest-guarding fish species constitute a sensitive target to disturbances by recreational fisheries during reproduction period. Individuals that are guarding offspring typically show increased aggressiveness, rendering them more susceptible to capture by angling. Although captured nesting individuals are typically released through protective regulations, catch-and-release (C&R) induces an at least temporary cessation of nest-guarding and a stress response in the adult fish. Both increase the potential for enhanced brood predation to occur, with implications for reproductive output. Although pikeperch Sander lucioperca is a famous nest-guarding species with high importance for recreational fisheries throughout Europe, the consequences of angling interferences have never been assessed in regard to the reproductive success of nesting individuals. In addition, knowledge about the selectivity of angling for certain phenotypes of pikeperch allows an extension of insights from ecological to potential evolutionary implications of both extractive and non-extractive angling. This study aimed to quantify the impacts of C&R angling on individual reproductive success of pikeperch and the severity of induced behavioral alterations both during and after nest-guarding season. In addition, phenotypic traits of pikeperch that are subjected to both sexual- and angling-induced selection, were identified. Firstly, pikeperch displayed high aggressiveness during nest-guarding, corroborating previously untested assumptions about their increased susceptibility to angling. Angled-and-released males showed unexpectedly long absence times from the nest after catch-and-release, suggesting potentially severe consequences for brood survival. However, the lack of observed nest predation and a low sample size of nesting males left this insight preliminary. Although swimming activity of a majority of pikeperch remained unaffected by C&R during growth season, individuals that were responsive showed prolonged alterations of activity exceeding seven days in all cases. Importantly, while a reduced activity space, possibly relating to territoriality or social dominance, was beneficial to the mating chances of both sexes in pikeperch, this trait tended to be selected against by angling. Conclusions about the impacts of catch-and-release angling on reproductive success of pikeperch remain speculative due to the low statistical power in this study. This is reinforced by the finding that the severities of stress responses induced by C&R may indeed vary substantially across individuals, as was observed with respect to activity during growth season. Thus, in light of the remaining uncertainties, it is recommended to keep catch rates and treatment of captured pikeperch during nest-guarding period at a moderate level. The observations of prolonged nest absence times induced by C&R during spawning and the emerging trend of potential counterselection for space-use between sexual- and angling-induced selection revealed important future research needs that are highlighted in this work.