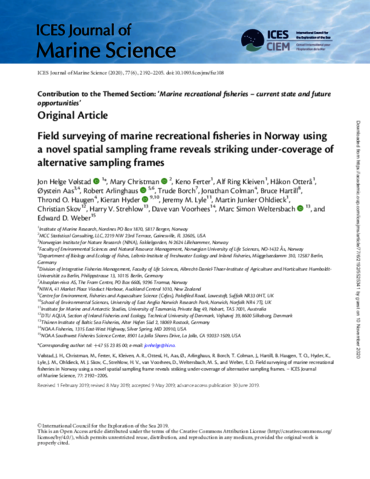 Norway has the highest participation rate in marine recreational fisheries (MRF) in Europe, and is popular among marine tourist anglers. Fishing licences are not required for marine recreational anglers, and the complex and long coastline makes on-site surveys a challenge. A novel approach for spatial sampling was developed and tested in on-site surveys, as part of a National study of MRF using multiple sampling frames including a telephone screening survey based on the national telephone directory. Field surveys were conducted in Troms and Hordaland Counties, and in the Oslofjord. We created spatial sampling frames of modified Voronoi polygons with continuous sea-surface area, with clusters of polygons as primary sampling units (PSUs). Interviews of intercepted anglers were obtained quarterly from a stratified sample of PSUs searched by boat. Many anglers interviewed in Troms (63%) and Hordaland (53%) were non-residents, of which 92 and 66% stayed in registered tourist fishing camps, respectively. Most anglers in the Oslofjord were residents, and in the inner Oslofjord, 63% of the resident anglers interviewed on-site were born outside Norway, which was not reflected in the telephone survey. Thus, if only off-site methods were used to map Norwegian MRF, this could lead to biased results in some regions.