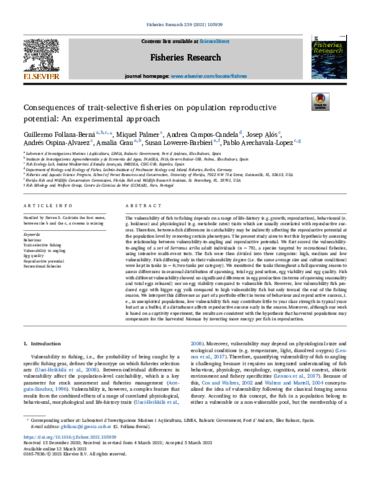 The vulnerability of fish to fishing depends on a range of life-history (e.g. growth; reproduction), behavioural (e.g. boldness) and physiological (e.g. metabolic rates) traits which are usually correlated with reproductive success. Therefore, between-fish differences in catchability may be indirectly affecting the reproductive potential at the population level by removing certain phenotypes. The present study aims to test this hypothesis by assessing the relationship between vulnerability-to-angling and reproductive potential. We first scored the vulnerability to-angling of a set of Serranus scriba adult individuals (n = 78), a species targeted by recreational fisheries, using intensive multi-event tests. The fish were then divided into three categories: high, medium and low vulnerability. Fish differing only in their vulnerability degree (i.e. the same average size and culture conditions) were kept in tanks (n = 6; two tanks per category). We monitored the tanks throughout a full spawning season to assess differences in seasonal distribution of spawning, total egg production, egg viability and egg quality. Fish with different vulnerability showed no significant differences in egg production (in terms of spawning seasonality and total eggs released) nor on egg viability compared to vulnerable fish. However, low vulnerability fish produced eggs with bigger egg yolk compared to high vulnerability fish but only toward the end of the fishing season. We interpret this difference as part of a portfolio effect in terms of behaviour and reproductive success, i.e., in unexploited populations, low vulnerability fish may contribute little to year class strength in typical years but act as a buffer, if a disturbance affects reproductive success early in the season. Moreover, although our work is based on a captivity experiment, the results are consistent with the hypothesis that harvested populations may compensate for the harvested biomass by investing more energy per fish in reproduction.