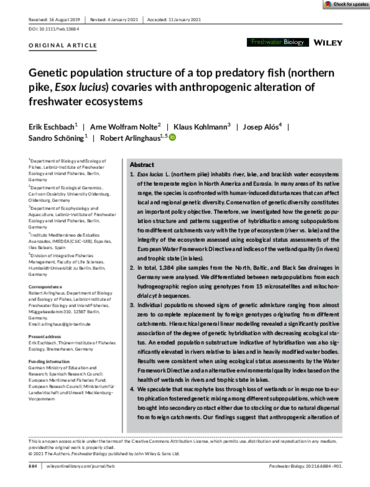 1. Esox lucius L. (northern pike) inhabits river, lake, and brackish water ecosystems of the temperate region in North America and Eurasia. In many areas of its native range, the species is confronted with human-induced disturbances that can affect local and regional genetic diversity. Conservation of genetic diversity constitutes an important policy objective. Therefore, we investigated how the genetic population structure and patterns suggestive of hybridisation among subpopulations from different catchments vary with the type of ecosystem (river vs. lake) and the integrity of the ecosystem assessed using ecological status assessments of the European Water Framework Directive and indices of the wetland quality (in rivers) and trophic state (in lakes).

2. In total, 1,384 pike samples from the North, Baltic, and Black Sea drainages in Germany were analysed. We differentiated between metapopulations from each hydrogeographic region using genotypes from 15 microsatellites and mitochondrial cyt b sequences.

3. Individual populations showed signs of genetic admixture ranging from almost zero to complete replacement by foreign genotypes originating from different catchments. Hierarchical general linear modelling revealed a significantly positive association of the degree of genetic hybridisation with decreasing ecological status. An eroded population substructure indicative of hybridisation was also significantly elevated in rivers relative to lakes and in heavily modified water bodies. Results were consistent when using ecological status assessments by the Water Framework Directive and an alternative environmental quality index based on the health of wetlands in rivers and trophic state in lakes.

4. We speculate that macrophyte loss through loss of wetlands or in response to eutrophication fostered genetic mixing among different subpopulations, which were brought into secondary contact either due to stocking or due to natural dispersal from foreign catchments. Our findings suggest that anthropogenic alteration of freshwater ecosystems may influence the genetic structures present in a freshwater top piscivore at both local and regional scales.