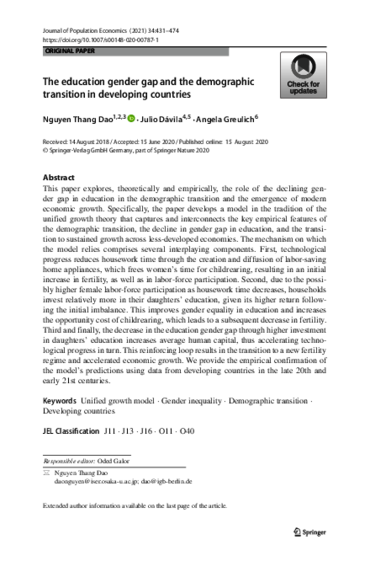 This paper explores, theoretically and empirically, the role of the declining gender gap in education in the demographic transition and the emergence of modern economic growth. Specifically, the paper develops a model in the tradition of the unified growth theory that captures and interconnects the key empirical features of the demographic transition, the decline in gender gap in education, and the transition to sustained growth across less-developed economies. The mechanism on which the model relies comprises several interplaying components. First, technological progress reduces housework time through the creation and diffusion of labor-saving home appliances, which frees women’s time for childrearing, resulting in an initial increase in fertility, as well as in labor-force participation. Second, due to the possibly higher female labor-force participation as housework time decreases, households invest relatively more in their daughters’ education, given its higher return following the initial imbalance. This improves gender equality in education and increases the opportunity cost of childrearing, which leads to a subsequent decrease in fertility. Third and finally, the decrease in the education gender gap through higher investment in daughters’ education increases average human capital, thus accelerating technological progress in turn. This reinforcing loop results in the transition to a new fertility regime and accelerated economic growth. We provide the empirical confirmation of the model’s predictions using data from developing countries in the late 20th and early 21st centuries.