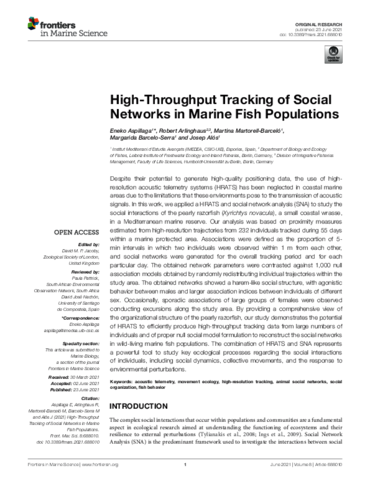 Despite their potential to generate high-quality positioning data, the use of highresolution acoustic telemetry systems (HRATS) has been neglected in coastal marine areas due to the limitations that these environments pose to the transmission of acoustic signals. In this work, we applied a HRATS and social network analysis (SNA) to study the social interactions of the pearly razorfish (Xyrichtys novacula), a small coastal wrasse, in a Mediterranean marine reserve. Our analysis was based on proximity measures estimated from high-resolution trajectories from 232 individuals tracked during 55 days within a marine protected area. Associations were defined as the proportion of 5-min intervals in which two individuals were observed within 1 m from each other, and social networks were generated for the overall tracking period and for each particular day. The obtained network parameters were contrasted against 1,000 null association models obtained by randomly redistributing individual trajectories within the study area. The obtained networks showed a harem-like social structure, with agonistic behavior between males and larger association indices between individuals of different sex. Occasionally, sporadic associations of large groups of females were observed conducting excursions along the study area. By providing a comprehensive view of the organizational structure of the pearly razorfish, our study demonstrates the potential of HRATS to efficiently produce high-throughput tracking data from large numbers of individuals and of proper null social model formulation to reconstruct the social networks in wild-living marine fish populations. The combination of HRATS and SNA represents a powerful tool to study key ecological processes regarding the social interactions of individuals, including social dynamics, collective movements, and the response to environmental perturbations.