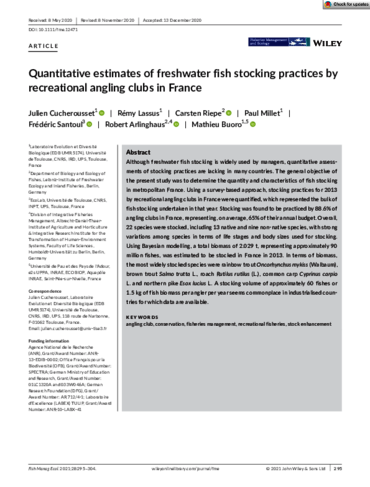 Although freshwater fish stocking is widely used by managers, quantitative assessments of stocking practices are lacking in many countries. The general objective of the present study was to determine the quantity and characteristics of fish stocking in metropolitan France. Using a survey-based approach, stocking practices for 2013 by recreational angling clubs in France were quantified, which represented the bulk of fish stocking undertaken in that year. Stocking was found to be practiced by 88.6% of angling clubs in France, representing, on average, 65% of their annual budget. Overall, 22 species were stocked, including 13 native and nine non-native species, with strong variations among species in terms of life stages and body sizes used for stocking. Using Bayesian modelling, a total biomass of 2.029 t, representing approximately 90 million fishes, was estimated to be stocked in France in 2013. In terms of biomass, the most widely stocked species were rainbow trout Oncorhynchus mykiss (Walbaum), brown trout Salmo trutta L., roach Rutilus rutilus (L.), common carp Cyprinus carpio L. and northern pike Esox lucius L. A stocking volume of approximately 60 fishes or 1.5 kg of fish biomass per angler per year seems commonplace in industrialised countries for which data are available.