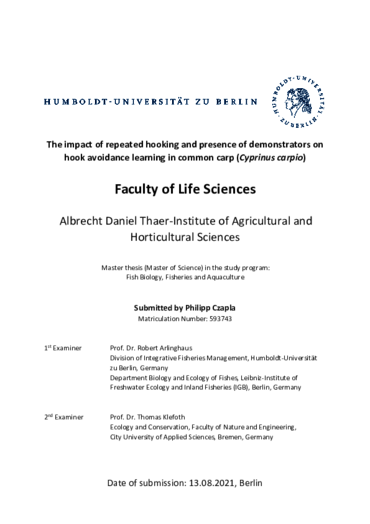 The common carp (Cyprinus carpio) is a popular target fish species in recreational fishing. In Europe, the species is often targeted by highly specialized carp anglers who often practice voluntary catch-and-release (C&R). Catch-and-release can result in repeated contacts of individual fish with fishing gear, which are likely perceived as stressful and harmful events by released individuals. Previous work has shown that common carp are able to remember a single hooking experience for up to 14 months, which reduces individual vulnerability to angling gear in the future. The hook avoidance behavior can be either the result of a private hooking experience or can be socially learned by observing a conspecific being hooked and released. The open question, whether repeated private or social hooking experiences increase the hook avoidance behavior in common carp relative to single hooking events, was addressed in this thesis. Furthermore, it was hypothesized that the presence of an experienced demonstrator fosters higher hook avoidance abilities in carp compared to situations lacking a demonstrator. Using a fully controlled experimental design in a laboratory environment, 74 common carp were either exposed to a repeated, a new or an old (hooking experience that was 17 months old) private or social hooking experience, and examined for hook avoidance within aquaria on the next three consecutive days. The behavior towards non-threatening sham-rigs (i.e., removed hook tip) or freebait served as measures for hook avoidance and was compared to angling-naïve controls. Private hook avoidance was found to be present in all experiments, whereas observations of social hook avoidance were not evident on statistical grounds. The repeated and the new private hooking experience was of similar magnitude two hours post rehooking, whereas two days after rehooking the repeated private experience induced a stronger hooking avoidance than being hooked only once. There was no statistically supported effect of the presence of a demonstrator on carp hook avoidance. Overall, this thesis experimentally supports previous findings that privately learned hook avoidance is present in carp and that repeated contacts with fishing hooks decrease the individual vulnerability to angling of common carp. Reduced catchability can negatively affect angler satisfaction or bias catch-based stock assessments and should be considered when managing recreational carp fisheries.