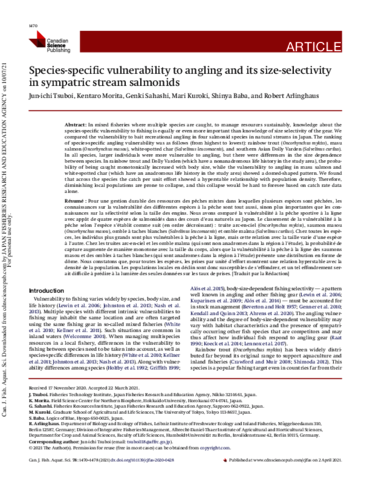 In mixed fisheries where multiple species are caught, to manage resources sustainably, knowledge about the species-specific vulnerability to fishing is equally or even more important than knowledge of size selectivity of the gear. We compared the vulnerability to bait recreational angling in four salmonid species in natural streams in Japan. The ranking of species-specific angling vulnerability was as follows (from highest to lowest): rainbow trout (Oncorhynchus mykiss), masu salmon (Oncorhynchus masou), white-spotted char (Salvelinus leucomaenis), and southern Asian Dolly Varden (Salvelinus curilus). In all species, larger individuals were more vulnerable to angling, but there were differences in the size dependence between species. In rainbow trout and Dolly Varden (which have a nonanadromous life history in the study area), the probability of being caught monotonically increased with body size, while the vulnerability to angling in masu salmon and white-spotted char (which have an anadromous life history in the study area) showed a domed-shaped pattern. We found that across the species the catch per unit effort showed a hyperstable relationship with population density. Therefore, diminishing local populations are prone to collapse, and this collapse would be hard to foresee based on catch rate data alone.

Veröffentlicht : 2021
Erschienen in : Canadian Journal of Fisheries and Aquatic Sciences