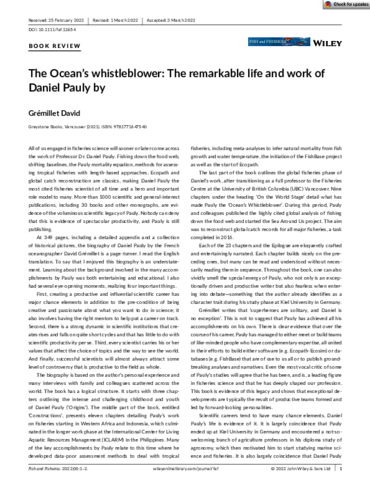 All of us engaged in fisheries science will sooner or later come across the work of Professor Dr. Daniel Pauly. Fishing down the food web, shifting baselines, the Pauly mortality equation, methods for assessing tropical fisheries with length-based approaches, Ecopath and global catch reconstruction are classics, making Daniel Pauly the most cited fisheries scientist of all time and a hero and important role model to many. More than 1000 scientific and general-interest publications, including 30 books and other monographs, are evidence of the voluminous scientific legacy of Pauly. Nobody can deny that this is evidence of spectacular productivity, and Pauly is still publishing. At 349 pages, including a detailed appendix and a collection of historical pictures, the biography of Daniel Pauly by the French oceanographer David Grémillet is a page-turner. I read the English translation. To say that I enjoyed this biography is an understatement. Learning about the background involved in the many accomplishments by Pauly was both entertaining and educational. I also had several eye-opening moments, realizing four important things. First, creating a productive and influential scientific career has major chance elements in addition to the pre-condition of being creative and passionate about what you want to do in science; it also involves having the right mentors to help put a career on track. Second, there is a strong dynamic in scientific institutions that creates rises and falls on quite short cycles and that has little to do with scientific productivity per se. Third, every scientist carries his or her values that affect the choice of topics and the way to see the world. And finally, successful scientists will almost always attract some level of controversy that is productive to the field as whole.