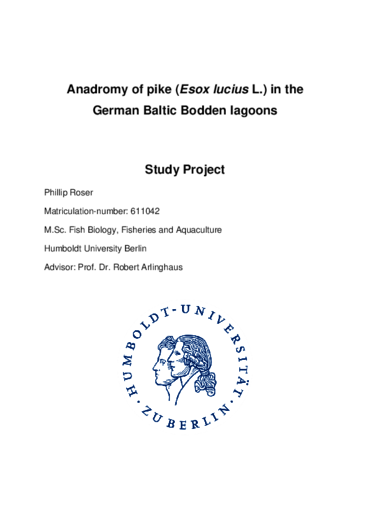 Pike populations across the Baltic sea have undergone declines in recent decades. The reasons for this decline are not fully understood but the loss of access to freshwater habitats in tributaries has been put forth as one detrimental factor impacting anadromous pike subpopulations in particular. Knowledge on the ecology of brackish pike in the southern Baltic waters of Germany is scarce. I investigated anadromous spawning behavior in pike from the brackish lagoon systems around the German Island of Rügen by combining findings from a literature review, local knowledge derived from stakeholder interviews and a systematic electrofishing survey undertaken during the spawning season 2021. The results confirm the existence of freshwater spawning pike across the study system. Stakeholders reports could be corroborated by the results of the electrofishing survey. Recapture data moreover point towards the existence of locally adapted anadromous subpopulations which undertake natal homing as previously shown from other parts of the Baltic. However, results also indicate that landscape modifications for water management have significantly reduced the historic extent of accessible freshwater spawning habitat through migration barriers. This has likely resulted in local extinction or strong decline of once abundant anadromous subpopulations, affecting the genetic diversity of the meta-population and possibly negatively impacting the stock resilience. Restoration of wetlands will likely help the Baltic pike stocks recover.