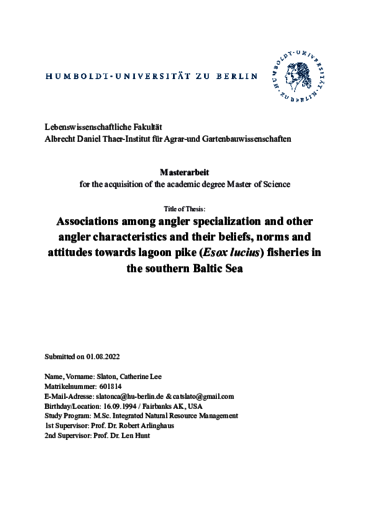 In response to the perceived decline of northern pike (Esox lucius) inhabiting lagoon ecosystems around the German island of Rügen in the Southern Baltic Sea, the German government has developed conservation areas and management strategies to help facilitate the improvement of pike stock. To facilitate management development, a deeper understanding of angler perceptions about environmental change, current management, and anglers’ preferences for future management is crucial. This study aimed to investigate the influence of key dimensions of angler characteristics, such as specialization and catch orientation, on their beliefs, norms, and attitudes regarding conservation and management. In 2020, data was collected from an online survey taken by anglers (N = 4335) requesting their opinion on a range of brackish pike conservation and management issues. Indices for measuring characteristics such as specialization, catch orientation, place attachment, pike importance, and demographics as predictor variables and metrics describing cognitions such as beliefs, norms, and attitudes towards management and conservation as dependent variables were created. Angler specialization was measured by three subdimensions (psychological commitment, behavioral commitment and skill). Angler specialization was a stronger predictor of beliefs and attitudes toward management and conservation issues than for personal norms regarding these issues. Behavioral commitment as a subdimension of angler specialization proved to be a strong explanatory predictor for anglers’ belief of environmental change, e.g., in changes in stock sizes and populations of natural fish predators. Specialization, particularly behavioral commitment, also correlated very strongly with anglers’ attitudes towards other resource users, specifically commercial fisheries which can be interpreted in that anglers who invest more time and money are more likely to perceive conflict with other resource users compared to anglers who are less committed. Anglers with a greater psychological commitment to fishing, measured as the centrality of angling in the lifestyle of anglers, are significantly related to many aspects of attitudes towards management options. Specifically, more psychologically committed anglers showed greater acceptance of harvest regulations than less specialized anglers while disliking access constraints more than less committed anglers. Specialized anglers also agreed more strongly than less specialized anglers that grey seals and cormorant populations should be reduced and pike habitat management should be implemented. Compared to specialization, attitudes to the catch aspects of pike fishing related much less to the various concepts measured in this study, showing that specialization is more predictive of how anglers feel about management than pike catch orientation. In terms of age, older anglers held more positive attitudes toward commercial fisheries but more negative attitudes towards conservation compared to younger anglers. After controlling for the above mentioned variables, resident anglers were found to less strongly accept additional harvest regulations, compared to tourist anglers. To conclude, this work demonstrates that beliefs, norms and attitudes to management issues of northern pike are strongly related to angler specialization. In contrast, more specialized anglers are willing to contribute to conservation through personal harvest constraints, and they are also more likely to be in conflict with commercial fisheries and with nature protection actions to constrain access to space or actions that lead to rises in natural predators. Therefore, knowing the specialization level of anglers can help understand the conflict proneness of anglers, with additional insights residing in knowledge of age and residency.