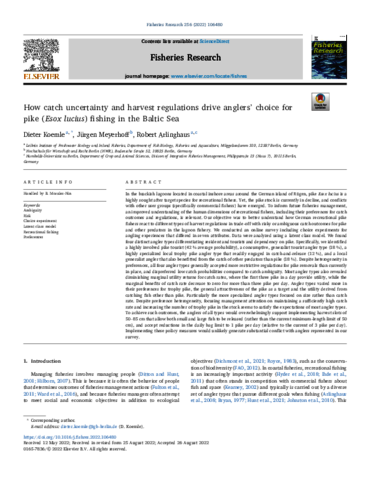 In the brackish lagoons located in coastal inshore areas around the German island of Rügen, pike Esox lucius is a highly sought after target species for recreational fishers. Yet, the pike stock is currently in decline, and conflicts with other user groups (specifically commercial fishers) have emerged. To inform future fisheries management, an improved understanding of the human dimensions of recreational fishers, including their preferences for catch outcomes and regulations, is relevant. Our objective was to better understand how German recreational pike fishers react to different types of harvest regulations in trade-off with risky or ambiguous catch outcomes for pike and other predators in the lagoon fishery. We conducted an online survey including choice experiments for angling experiences that differed in seven attributes. Data were analyzed using a latent class model. We found four distinct angler types differentiating resident and tourists and dependency on pike. Specifically, we identified a highly involved pike tourist (42 % average probability), a consumptive, generalist tourist angler type (18 %), a highly specialized local trophy pike angler type that readily engaged in catch-and-release (12 %), and a local generalist angler that also benefitted from the catch of other predators than pike (18 %). Despite heterogeneity in preferences, all four angler types generally accepted more restrictive regulations for pike removals than currently in place, and dispreferred low catch probabilities compared to catch ambiguity. Most angler types also revealed diminishing marginal utility returns for catch rates, where the first three pike in a day provide utility, while the marginal benefits of catch rate decrease to zero for more than three pike per day. Angler types varied more in their preferences for trophy pike, the general attractiveness of the pike as a target and the utility derived from catching fish other than pike. Particularly the more specialized angler types focused on size rather than catch rate. Despite preference heterogeneity, focusing management attention on maintaining a sufficiently high catch rate and increasing the number of trophy pike in the stock seems to satisfy the expectations of most angler types. To achieve such outcomes, the anglers of all types would overwhelmingly support implementing harvest slots of 50–85 cm that allow both small and large fish to be released (rather than the current minimum-length limit of 50 cm), and accept reductions in the daily bag limit to 1 pike per day (relative to the current of 3 pike per day). Implementing these policy measures would unlikely generate substantial conflict with anglers represented in our survey.