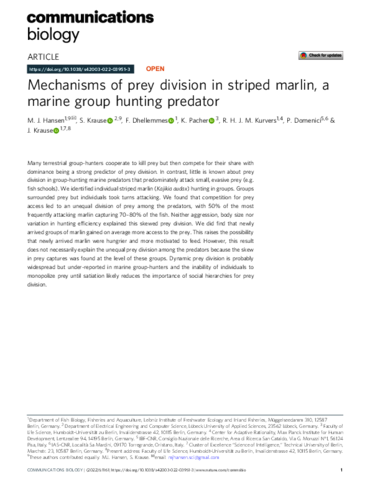 Many terrestrial group-hunters cooperate to kill prey but then compete for their share with dominance being a strong predictor of prey division. In contrast, little is known about prey division in group-hunting marine predators that predominately attack small, evasive prey (e.g. fish schools). We identified individual striped marlin (Kajikia audax) hunting in groups. Groups surrounded prey but individuals took turns attacking. We found that competition for prey access led to an unequal division of prey among the predators, with 50% of the most frequently attacking marlin capturing 70–80% of the fish. Neither aggression, body size nor variation in hunting efficiency explained this skewed prey division. We did find that newly arrived groups of marlin gained on average more access to the prey. This raises the possibility that newly arrived marlin were hungrier and more motivated to feed. However, this result does not necessarily explain the unequal prey division among the predators because the skew in prey captures was found at the level of these groups. Dynamic prey division is probably widespread but under-reported in marine group-hunters and the inability of individuals to monopolize prey until satiation likely reduces the importance of social hierarchies for prey division.